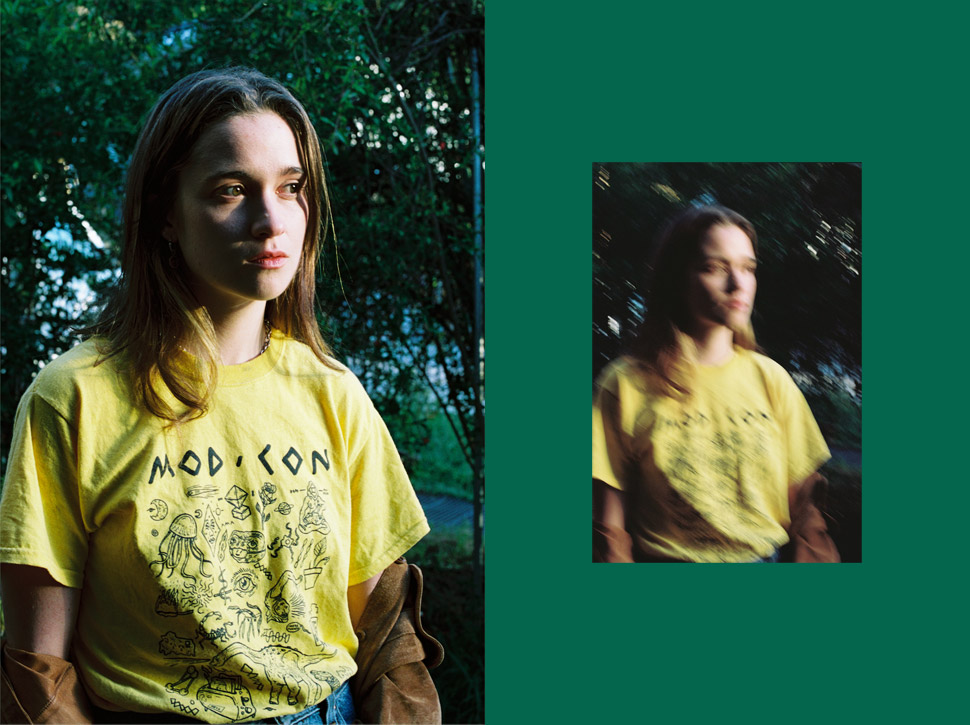 An Interview with Director Alice Englert

At the start of the year we announced our top videos for the Booooooom TV Awards. Australian writer-director Alice Englert’s debut, “The Boyfriend Game,” was one of our picks for Best Short Film. Featuring impressive performances by her two young leads, Englert perfectly captured the painful awkwardness of adolescent friendship and imagination. We’ve since had a chance to catch up with Englert to discuss more about her work and how this particular project came about.

Check out “The Boyfriend Game” below, if you haven’t already, as well as our full interview with Alice Englert! Photos (above) by Madeleine Morlet.

Jeff Hamada: Paint us a picture of young Alice Englert. What were you like?

Alice Englert: I was heart on sleeve and I liked adventure but was also a bit sad. I loved to swim and swim and would turn blue I was so cold and still not feel it or claim not to feel it. I felt thrilled and afraid of life and also suspicious of things like Tupperware ads where you saw all the perfect families and Disney endings. I hated canned laughter. Scared me. I had bad knees (still do but bit better) and it meant that sometimes I would fall over and dislocate something. Couldn’t run properly. I couldn’t totally keep up with my friends but I think that helped me, being a bit of a loser, being the worst at stuff made me see what other people were doing, helped me be creative in different kinds of directions. My childhood was a lot of different stuff. I was between parents and places a lot. There was love but I also always felt like there was a lot to consider. Oh and I like girls and boys too but didn’t really understand how fine that was when I was young. I thought I needed to figure it out. My sexuality, I mean.

I asked my best friend Tintin Kelly, who I have known since I was 4 what I was like as a kid. I thought it might be a more honest portrait but she’s written only the most deeply touching things. I should have asked a hater… Anyway, I will quote from it:

“When I think of little Alice, I never really think of a child, I think of a source of energy. Eager to prove herself in my world, and to be this unique human.” 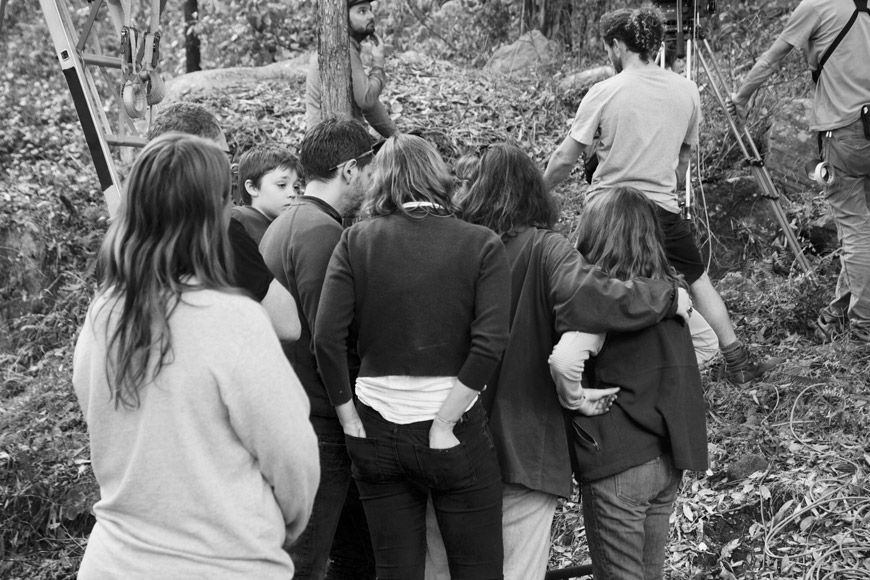 Cast and crew huddle around monitor, photo by Danielle Zorbas

JH: Can you remember any of the earliest stories you wrote?

AE: I remember nearly all of them… though the ones I didn’t write down maybe are my favorites, the ones made up with mates. There was one when I was 4-5 called The Princess and the Dragon the princess ran away from the castle and the dragon owned a poodle and they talk about its poo in it. There was another called The Nanny which was a horror adventure story! inspired by something from my mums childhood (I was 5-6 I did story boards for that one). I started what seems a climate change inspired tale called The Glass Tube when I was 7 about the water level rising and the glass tube everybody had to live in. It was about a sister protecting a little brother. I did some drawings. I co-wrote a play about Romulus and Remus (I played Remus) when I was 12. I wrote a fantasy novel (many drafts, none in condition to be read) called The Silence from when I was 13 to 17 in big fat art books in tiny terrible hand writing I was terrified I would lose them which actually… that one I still want to finish.

JH: If we made a timeline of your life, but the milestones were all films that made an impact on you, what would be on there?

AE: Hayao Miyazaki formed me a lot as a little person. Monty Python was a funny world to find. One film that changed me deeply when I was 18-19 was The Act of Killing. I should mention I am a fan of my mums films. I was watching a lot of them being made growing up (except when they were too sexy) which obviously affected me hugely and I am a fan. Adolescence I just saw everything. Love Cassavettes, Kubrick, David lynch. Love Alien. This is not a comprehensive list, honestly this question is too exciting, can’t think properly, sort of gave up. 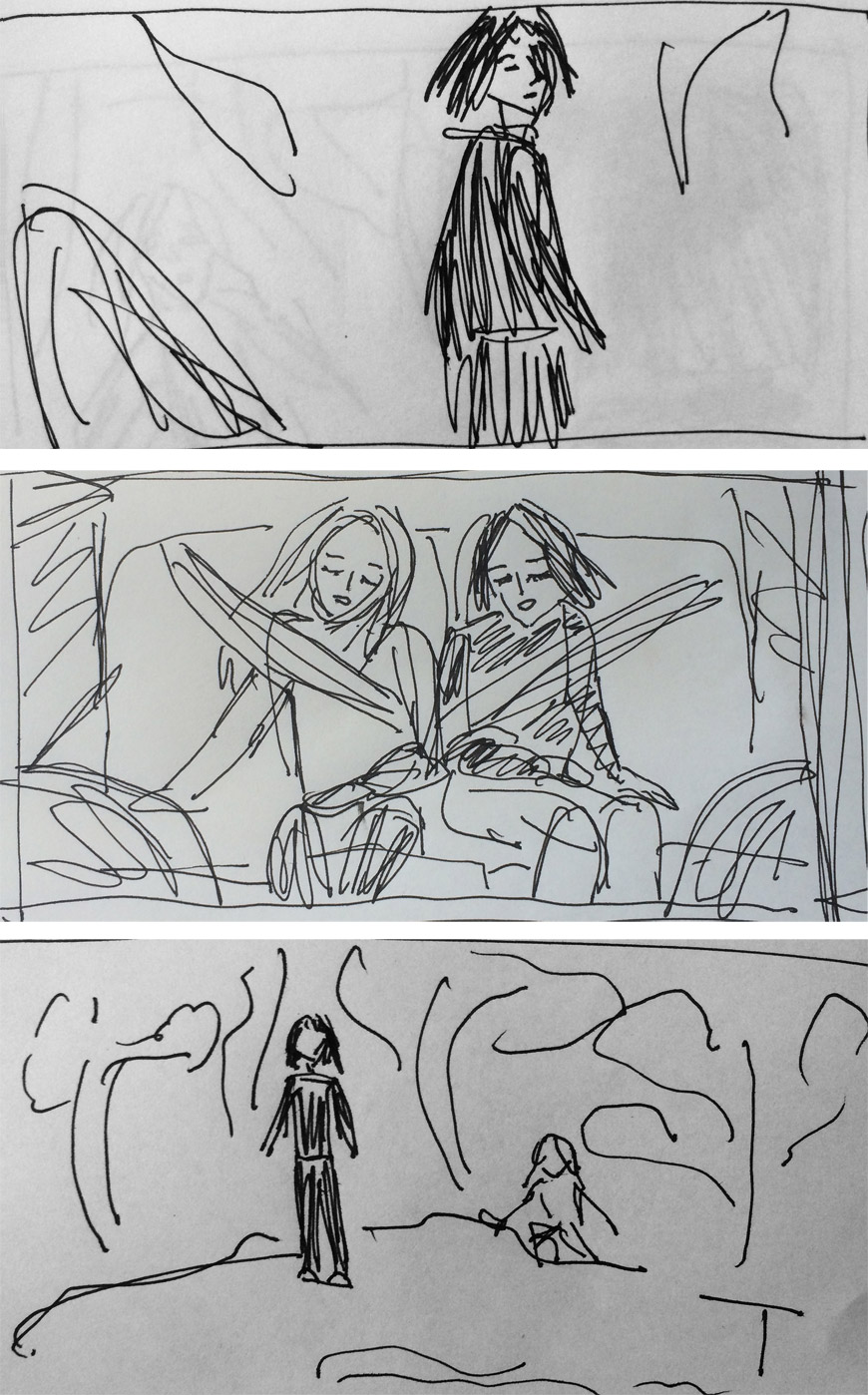 JH: “The Boyfriend Game” feels so painfully real and specific, it would be hard to imagine that it’s not based on a personal experience. Is it?

AE: I definitely played these games, but not this specific iteration! I remember when the pain of the pretend bubbled over into real pain though and I wrote about that. Sometimes it’s hard to tell if the game created the pain or was an outlet for it. I don’t think pain itself is sinister it’s just human feelings and sensation. The games around it though are tricky stuff. I remember spending hours in some paddock or bit of bush with some friend and our characters who had woefully wronged each other and we couldn’t figure out how to reconcile! At least we got to stop playing at some point sometimes I think a lot of grown up behaviour is never ending improvisation. 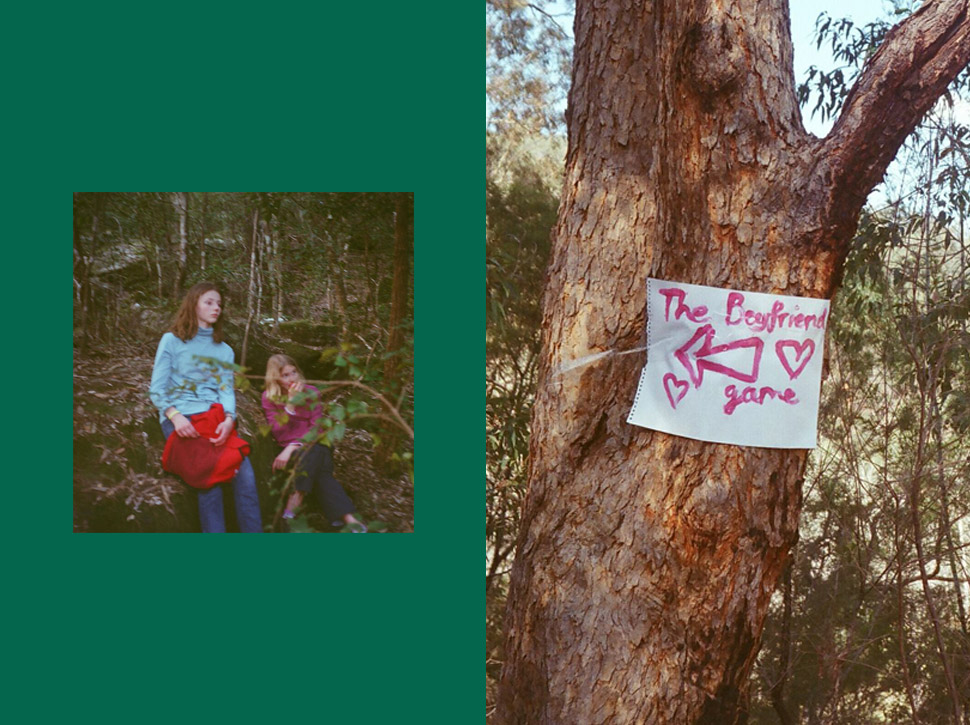 Thomasin Mckenzie and Morgan Davies in the bush, photo by Danielle Zorbas

JH: Did you have to audition a lot of actors to find the right girls?

AE: Did audition quite a few kids and it was completely great to see their takes on the scenes. When the deciding moment came I was certain who our characters were. Morgana Davies who plays Tomika is Morgan Davies now and an extremely intelligent and fabulous human being I felt honored to have at the helm. Thomasin Mckenzie is also a completely talented and fascinating person and is getting a lot of good attention for her work at the moment. It makes me really happy.

JH: Can you talk a bit about the process for getting these amazing performances out of the actors? Was the story something they could relate to?

AE: Well first of all, thanks. They are both very smart and deeply feeling people. Different though, which is cool. I told them secrets for the characters they had to keep from each other. We also played hand slapping school yard type games and built a good team around the film and got to hang out and rehearse. Improvising in rehearsal was something Morgan rocked at so I would just try and empower that and make a safe space for exploring and boundary pushing. I wanted Morgan to feel free. I already knew that he understood the character and the complex stuff because it was in the eyes. An old soul. Thomasin I would ask for what I wanted Edith to do and she’d take that somewhere inside herself and then blow life into it like a transmutation into gold. I just trusted them. I think I am being quite over the top here but I can’t help it. I love my actors. 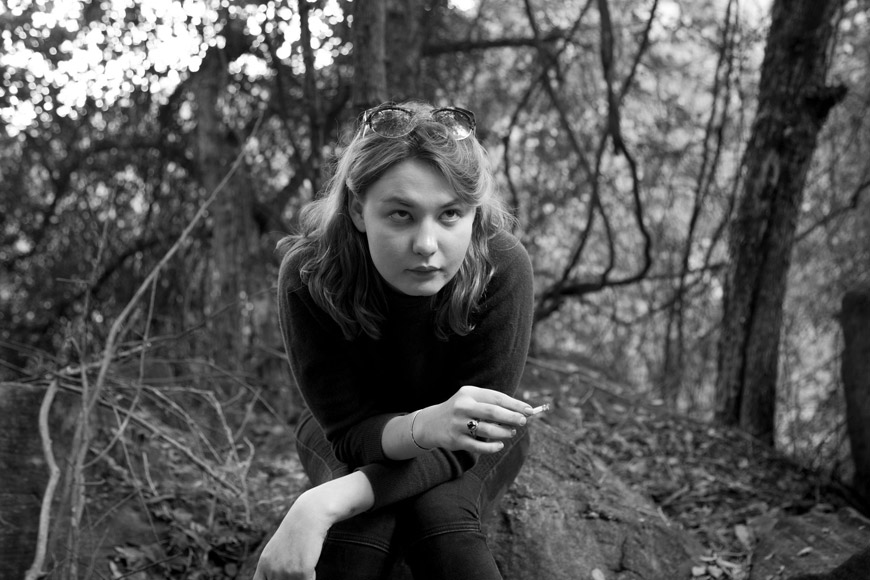 JH: What were some of the challenges of the shoot?

AE: It went smoothly. I was happy making it. I got to work with friends and people who just liked it because we had no money. A real gem of a team. Peter Knowles’ producing was so supportive and smooth. Lachlan Milne, DOP with the quick kelpie eyes and good vibes. Madeleine Beyer, meticulous and loveable. Alexandre de Franceschi, editing legend!

There was a boys school camp across the river from us though and they were doing bonding activities very very loudly. They were wood chopping and possibly chain-sawing, yelling their little hearts out. It was like Lord of the Flies over there. So we had to yell our hearts out back at them to try and get sound a chance. Oh also it’s Australia and the bush so there are always potentially snakes, spiders, leeches, etc. but nobody got bit.

JH: I only noticed that you wrote and sang the song at the end of the film after my third or fourth viewing. Is that tricky to write a song for a film that you also wrote? Did you write the song after the film was completed?

AE: I wrote it during it. I sing to myself quite a bit and I thought it was right for it!

JH: What’s one piece of good advice that has stuck with you and who gave it to you? 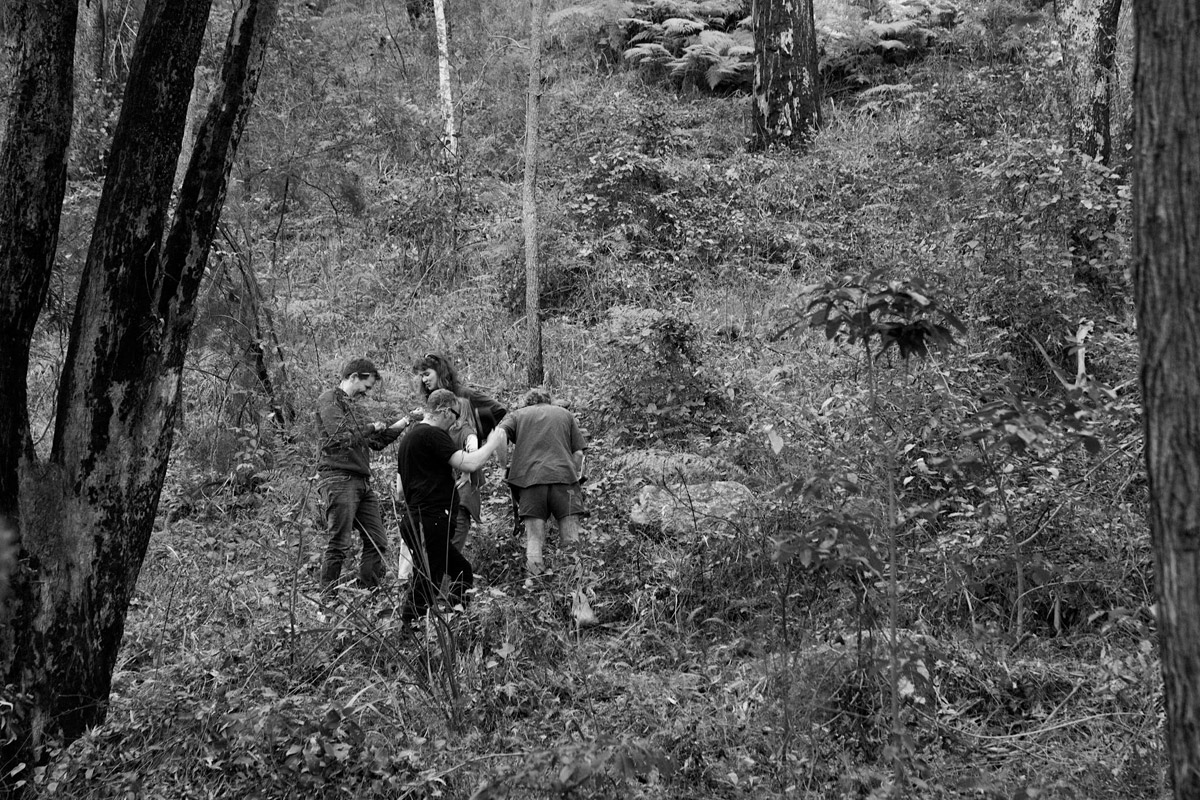 JH: Who are some other emerging filmmakers that get you excited to make things?

AE: Great question. I know so many short makers on the cusp I am excited for. Lots of women, frankly, a few boys I like too. Recently loved working with Ariel Klieman and Britt Poulton and Daniel Savage as an actress.

Not emerging but of-the-current-moment it’s obvious but Jordan Peele. I saw Us yesterday, stood in line outside the vista in LA stressed that perhaps I wouldn’t get into the cinema (great feeling when you do), ate a whole pack of milk duds and popcorn and I just loved being in the dark with my feet up laughing and shrieking at the mercy of his movie… I also love that he is re-starting twilight zone.

JH: Do you feel like what you’re doing now is the thing you were born to do?

AE: I am writing a feature. I have a film called Them That Follow where I am acting with Olivia Coleman and Walton Goggins coming out this year. It’s about Pentecostal snake handling communities. It was wild and moved me. We went to Sundance and will be in the cinemas (get your milk duds).

I am also writing more music. I’m acting in a new Ryan Murphy show for Netflix called Ratched, which I have been sworn to secrecy about. I also wanna finish reading some books and go see my friend’s tour in Asia (Princi) and hang out with my little brother.