An immersive sci-fi short by writer-director Stuart Langfield (previously featured here). “Loop” centres around a reclusive former tech CEO’s quest to teach AI how to experience and process true human emotions. However these ’emotion experiments’ involve a series of scripted scenarios that seem to do more to call basic humanity into question as the film blurs the lines between drama and sci-fi, human and machine, real and artificial. Stuart explains:

“Loop is an artistic exploration of a simple hypothesis: emotion cannot be programmed, it must be felt and experienced to be real. I started exploring this concept while observing my young son discover and display new emotions through his own direct experience and contact with others. He was learning to process the feelings of anger, joy, disappointment, sadness, and I found this progression of maturity fascinating and insightful. I started to question whether replicating an emotive incident could result in a similar reaction every time and, if so, could we program a machine to feel?”

Watch “Loop” above and check out our full interview with Stuart below to learn more about the project and his approach to filmmaking! 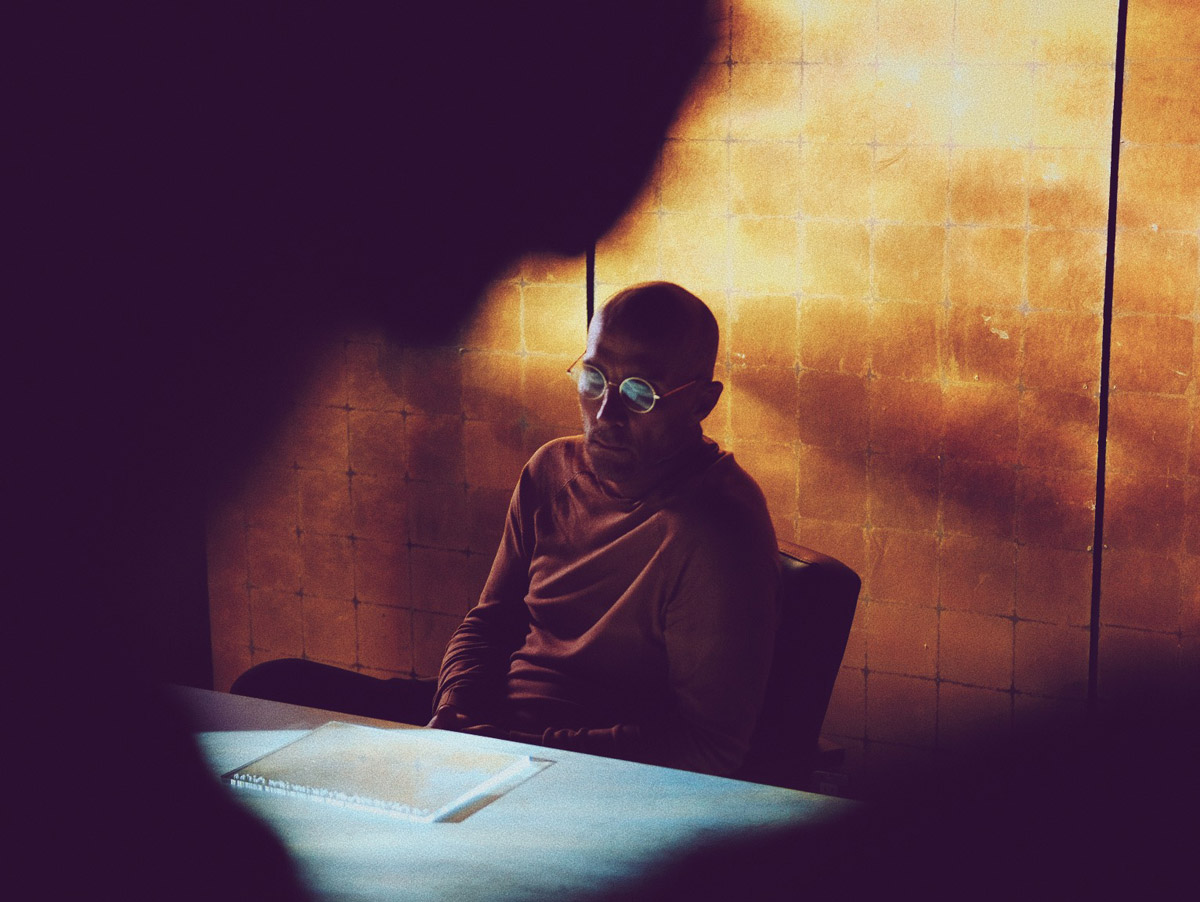 Jeff Hamada: You mentioned that the idea for the film actually came from observing your own son, can you talk a bit more about that?

Stuart Langfield: I started exploring this concept while observing my young son discover and display new emotions through his own direct experience and contact with others. He was learning to process the feelings of anger, joy, disappointment, sadness, and I found this progression of maturity fascinating and insightful. I started to question whether replicating an emotive incident could result in a similar reaction every time and, if so, could we program a machine to feel?

Jeff Hamada: I would imagine you spent a considerable amount of time paring down your ideas. What’s there on screen feels extremely lean—not a single wasted frame. Can you share any of the concepts that got trimmed away?

Stuart Langfield: The script as expected went through multiple rewrites, but a lot of the core meaning and concept of the film made it in. We managed to squeeze a lot of subtle detail into the narrative and the final picture, so I’m proud of the depth we were able to hold onto. Of course we had to axe some stuff due to budget considerations etc. Initially we were looking at building a polyhedron shaped set that contained a room akin to Mother in ‘Alien’, but had to scrap the idea as we felt we couldn’t achieve the right level of quality without compromising other areas. I’ll save that for the TV series :). 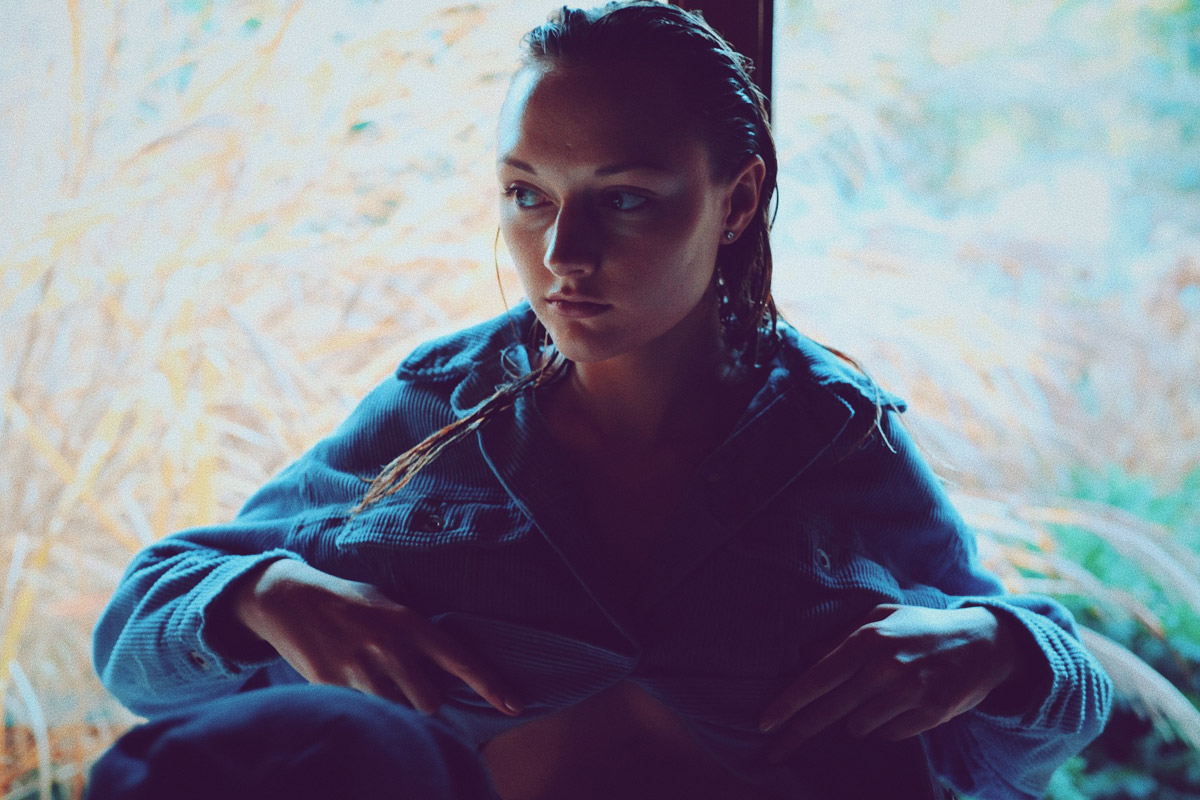 Jeff Hamada: Early on when the AI character’s eyes suddenly change and they come alive, it’s such a startling moment. How did you approach the sound design for the film?

Stuart Langfield: The eye effect itself wasn’t in the original script, but in the edit we decided it needed another element to make it clear she’s an android as we never wanted that aspect of the story to be ambiguous. We worked with Ryland Haggis at Playdate on the more ‘creative’ elements of the sound design. Our brief for the entire sonic approach was to strike a nice balance between futuristic and lo-fi. I wanted everything to feel tactile and slightly analog, to avoid the whole thing feeling too cold and emotionless and to give technology the feeling it had been built by one person or a small team. 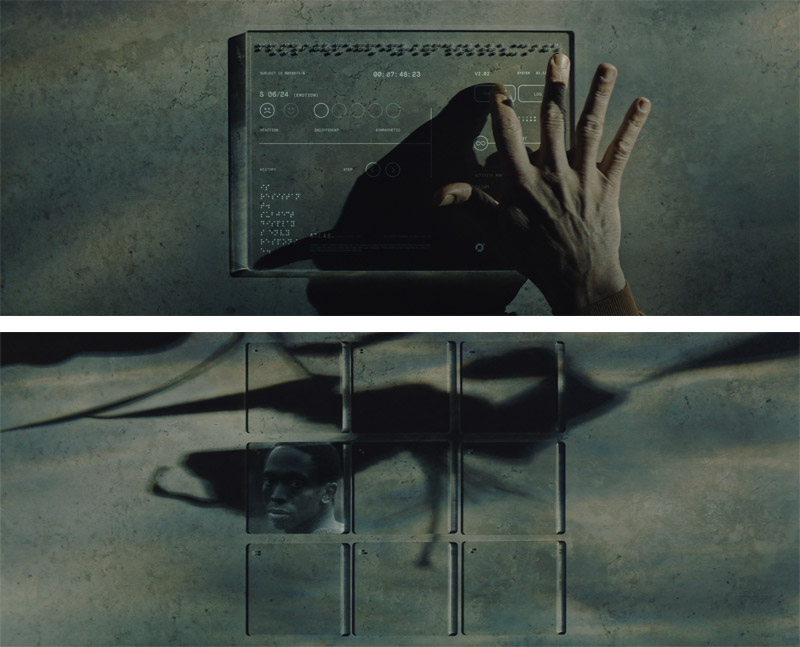 Jeff Hamada: Who came up with the computer interface? It was quite unique and otherworldly but it still felt like there was a logic and a system there.

Stuart Langfield: The concept for using braille was in one of my original mood boards for the film. Dylan Rekert the Art Director (and Exec Producer) picked up on that component and really ran with it. It’s a motif that’s subtly present throughout the film. The actual interface design was created by Mark Bulford over at Very Polite. Again like the sound design, we wanted something that felt both analog and futuristic, with a tactile component that the actors could connect with on set.

Jeff Hamada: In your mind what happens when the CEO is finally successful? Do you believe that AI will one day become “superintelligent” and at some point render humans extinct?

Stuart Langfield: There’s a lot of backstory not present in the film about who David is, why he’s working on this, what his goals are, but I think that should be left to the audience to decide. However I am really interested in the concept of an ‘intelligence explosion’ — the moment in time where AI supersedes the human race. 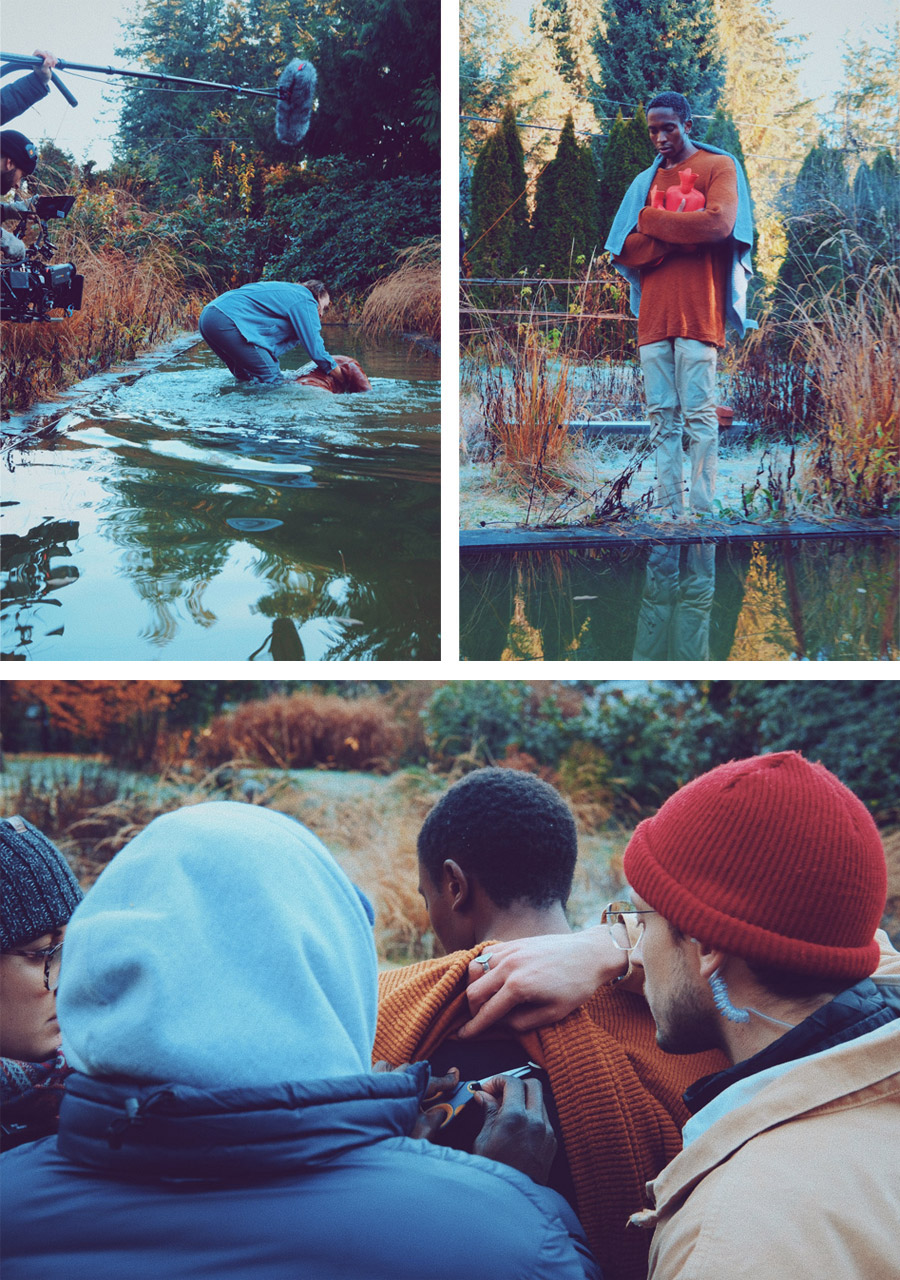 Jeff Hamada: I saw that Very Polite backed the film, how did you get them interested in the project and how was it working together?

Stuart Langfield: I’ve known and worked with Dylan Rekert; partner and Creative Director at Very Polite, for a number of years now, so the process was fairly organic. They had expressed interest in backing the project after seeing an early script and treatment for it. Very Polite are always putting their talents towards creating really interesting side projects, so this film fell under that umbrella for them. I’m hugely grateful not just for the financial investment, but also their expertise. Having Dylan and some of the other team onboard really elevated the whole film.

Jeff Hamada: How would you describe your aesthetic? What is a Stuart Langfield film?

Stuart Langfield: I think it’s something that continually evolves and changes with every film I create. My favourite films are the ones that tackle very human-focused subject matter, but they do it in ways that still feel thrilling and entertaining and beautiful. Those are the films I want to make. 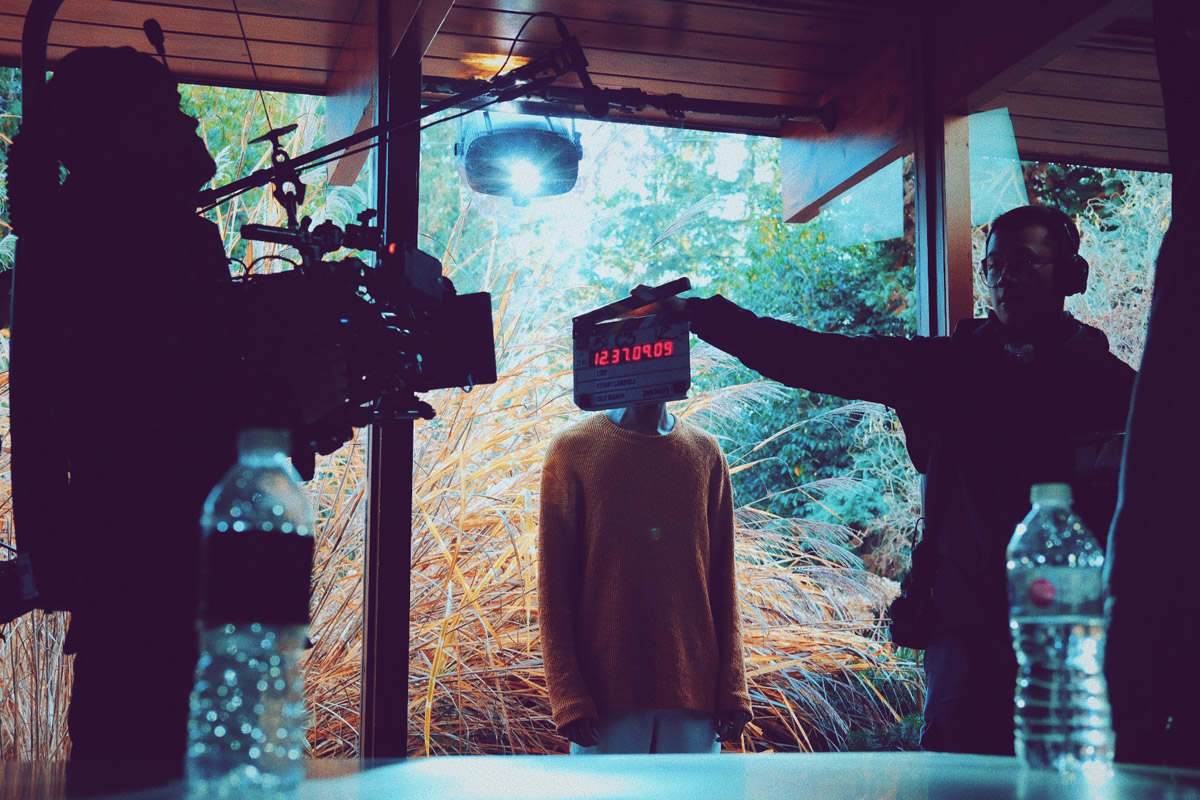 Jeff Hamada: Can you recommend some sci-fi films that you think are underrated or hidden gems, perhaps something people may not have even heard of?

Stuart Langfield: I actually don’t watch much sci-fi these days, and when I do I tend to fall back on classics like Alien and Bladerunner. Gattaca is an old favourite. More recently I loved Arrival. I tend to watch all kinds of movies. Lately I’ve been digging into a lot of 80s and 90s classics. Things that feel nostalgic to me. It’s good escapism from current world events.

Stuart Langfield: I’ve been writing a TV series pilot based on Loop. It’s through first draft phase now, so tweaking that and building a treatment around it. It’s turned out pretty different to the story and world within the short film, but there’s definitely some small threads to connect the two. Aside from that I’m starting to write a new feature/short film concept, and dipping my toes into the world of directing TV commercials.