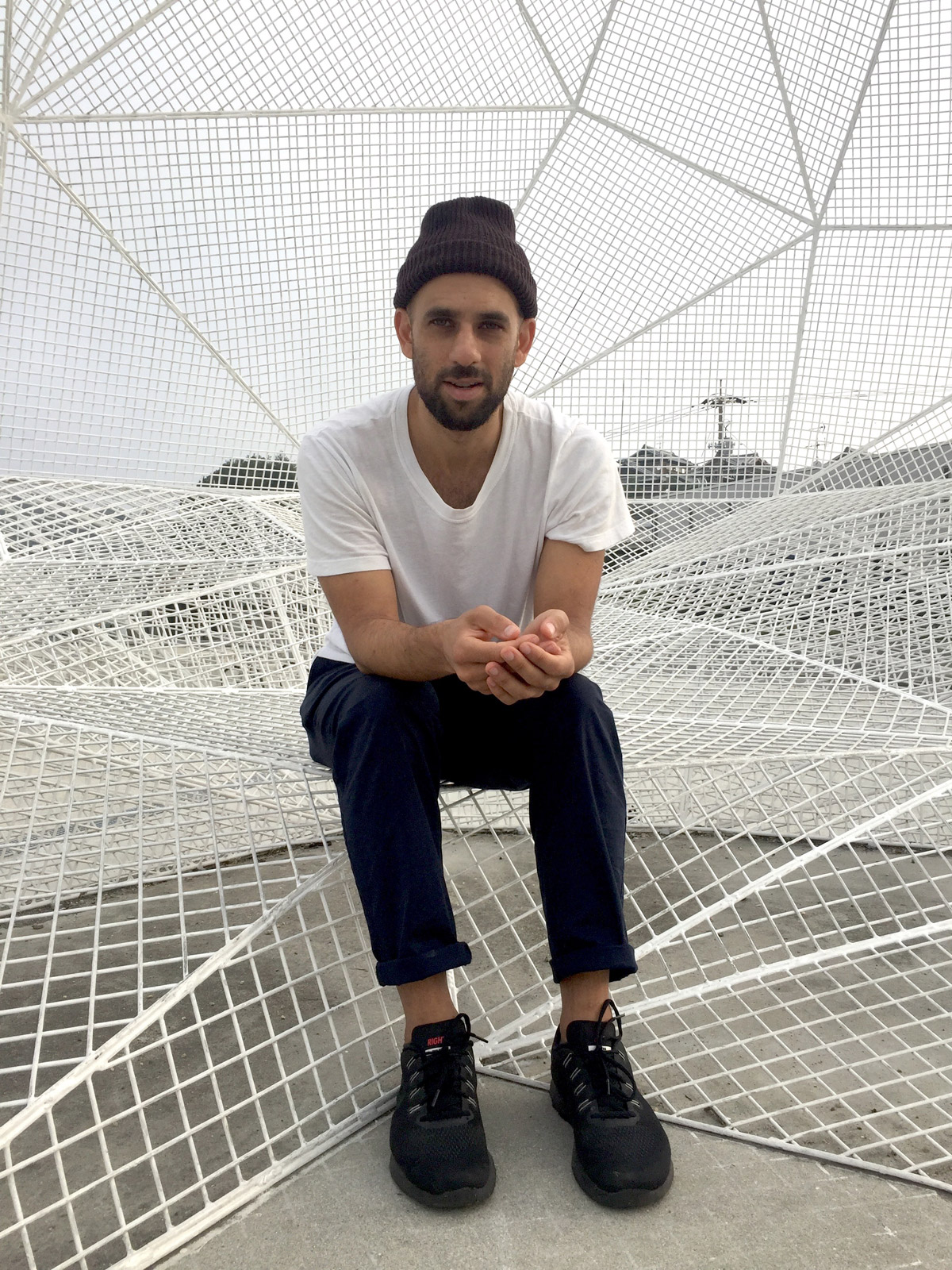 An Interview with Director Isaac Ravishankara

Isaac Ravishankara’s exhilarating video for LANY’s “Thick and Thin” was one of our favourite music videos of 2019! (Click here to check out our full list or here for a bunch more of his previously featured work). We had the pleasure of asking him some burning questions, not only about the logistics of making that video, but about his career and what’s in store for him next. Read our full interview with Isaac below!

Jeff Hamada: What is an Isaac Ravishankara music video? Do you feel like you have a signature?

Isaac Ravishankara: Ha. I don’t know! I feel like I’m drawn to telling simple, emotional narratives in an elevated way within the music video format. And some friends have pointed out that my music videos often focus on strong women and melancholy. There’s definitely a track record for this — Five Lumineers videos, KT Tunstall, Polica, Selah Sue, Active Child, LANY, and some others — but I couldn’t tell you why.

Also, in the last few years, I’ve been working a lot with dance and collaborating with some incredible dancers and choreographers. And my approach to dance is largely the same — without having any background in dance, I always view movement as a vehicle to convey feeling rather than just a spectacle to film.

JH: When did you decide you wanted to be a filmmaker?

IR: It’s a decision I’ve made multiple times in my life. The first was in middle school, when I was introduced to Wes Anderson’s films, and started making movies with my friends. The second was at the end of college, when I gave up on studying physics and didn’t know what else to do. I decided to move to New York to try to get work on film sets. The third was about 5 years ago, after I tried to walk away from directing. I went off to India to travel, visit family, and figure out my life.

I never found anything else I would rather do.

JH: I remember reading about how you went to see The Lumineers play a small show in a house in Denver in 2010. The video you captured of them performing “Ho Hey” helped launch their careers. What was the significance of that concert for you personally?

IR: I mean, those guys make amazing music, so they would have “launched” regardless. But that little house show was definitely around an inflection point for all of us. That was the first night we met, and I just happened to have my Canon 5D in my trunk. And like so many other things, it’s just right place, right time.

JH: The way you filmed that show reminded me of the way Vincent Moon shot The Take Away Shows on La Blogotheque — the raw energy of a band captured by someone whose curiosity really dictated where the camera looked. Who was inspiring you back then?

IR: I was, and still am, really inspired by all of the work Vincent Moon was doing back then… I think at the time my focus was just trying to capture a fleeting moment as it happens with a limited point of view (that classic 50mm). To be honest, most of the filmmakers who were really inspiring me a decade ago in the music video / commercial realm were doing really big, high concept work (Michel Gondry, Spike Jonze, Mark Romanek, etc). But as I’ve grown as a filmmaker, those influences have changed.

Active Child – “All Eyes On You”, directed by Isaac Ravishankara

JH: How has your approach changed over the years?

IR: My collaboration with The Lumineers was the beginning of a turn toward a more humble, emotional style of filmmaking. The projects we did together since that night have all been geared towards delivering an emotional response.

These days, that has become the core intention of my approach. First ask “what is the feeling we want the audience to have”, then work from there. Even on the more conceptual work, I try to allow the technique to elevate a feeling more than just play for spectacle.

JH: That’s pretty much the perfect dynamic to describe your video for LANY. As much as there is the power of the visual, there’s something about the overall feel of it that makes it so memorable. How did the concept for “Thick and Thin” come together?

IR: A video like this begins and ends with trust. I had worked with the band before (a video for “Super Far”), and they reached out about collaborating again. The concept grew out of a dream I had…it was always about that feeling of loneliness and separation after a breakup.

The pitch was simple. Your ex is at a party that reminds her of you, and decides to escape and drive down the coast to jump into the ocean. Meanwhile, in another reality, you’re sitting on the back of her car, and then follow her down to the water, but ultimately let her go. It has to be in one uncut shot, organically, so that you can feel like its actually happening.

To their credit, the band was immediately on board, and committed to waiting it out until we could figure out how to execute it. We kept giving them outs to go with another concept, but they stuck with us.

JH: What were the biggest challenges of the shoot? I assume there were many.

IR: Yep, there were a ton. I may have directed the video, but Paul was the one sitting on the back of the moving car, and Jason Baum, my producer, was the one who solved all the problems. Along with Drew Bienneman, our DP, and Chad Nicholson, our AD.

Some of the biggest challenges being:

– Locations: We had to find three locations that all tied together (the house, the highway, the beach access). Those three locations needed three separate permits. It took us almost a month to figure it out, and luckily the band waited for us.

– Timing: We had to time out the journey to match the song. Which meant police holding traffic for as long as they could, but ultimately us having to be off the road by the time traffic caught up to us. Plus we wanted to shoot sunset, so we only had 3 takes, because the reset time was about 20 minutes.

– Safety: Paul had to actually sit on the back of the car, which had to drive at about 40mph in order to make the timing work out. He’s held on by a single clasp, which he unhooks just below frame before standing up. The speed of the drive literally broke our first camera car, and we got a backup to set just in time. It was scary.

– Budget: To make it all work, we needed way more money than the label had available. So we agreed to shoot ANOTHER video (Malibu Nights) down at the beach after the sun went down and consolidate the budgets. Insane. But we couldn’t shoot Thick and Thin in the dark anyway, so… 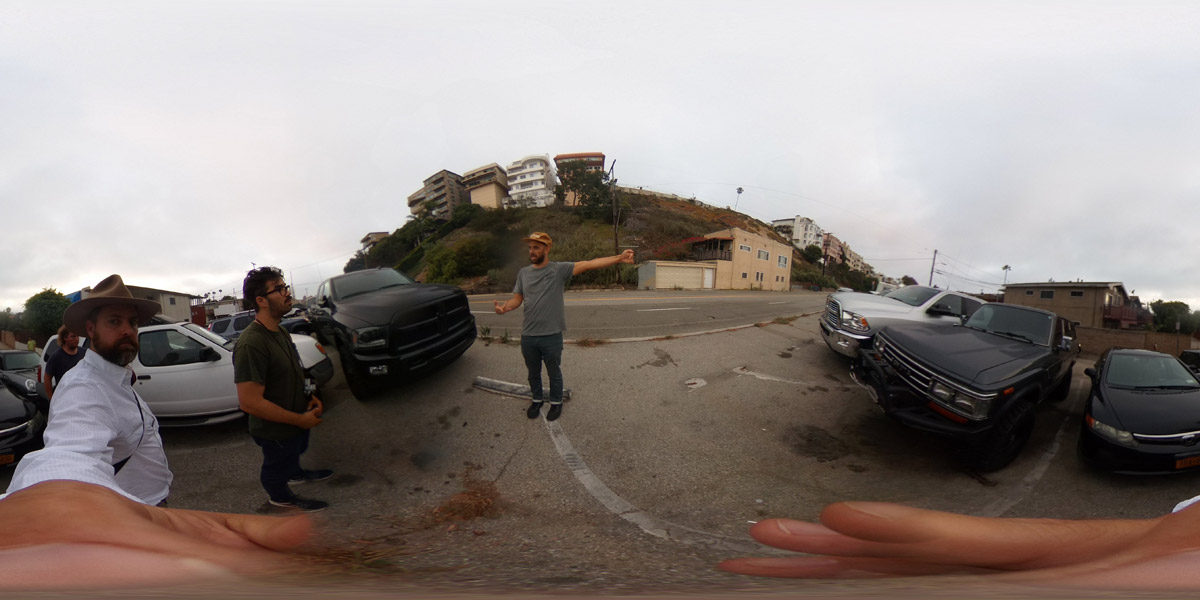 JH: Does the camera car drive off when the camera looks up? Just thinking about the timing of all of it gives me anxiety—and to make it feel effortless…

IR: Ha. Yeah. We had to have 3 cars trailing the picture car — the electric camera car, a follow van, and a trailing police officer. And I wanted us to flip around to lead them down to the beach. So we choreographed Paul standing up on the trunk as a way to send all 3 cars escaping under the frame before we pull back around.

We weren’t allowed to hold traffic the duration of the shot either (we were given 4 minute windows), so as soon as the picture car is out of frame, someone had to jump out of the bushes and drive it away as well. Insane.

I forgot to mention – the whole shot is over 2 miles, which added even more problems. The traffic hold had to start AFTER our shot starts, and END before the shot ends (to make the timing work within the 4 minutes). And we had to coordinate both ends of the shot by cellphone since the walkies wouldn’t reach, hiding support in the bushes for when we get out of the car. Plus, we needed separate music sources for the house/neighborhood, the car drive (loud enough for Paul to hear on the back), and the walk to the beach. So those had to all run on the same signal. 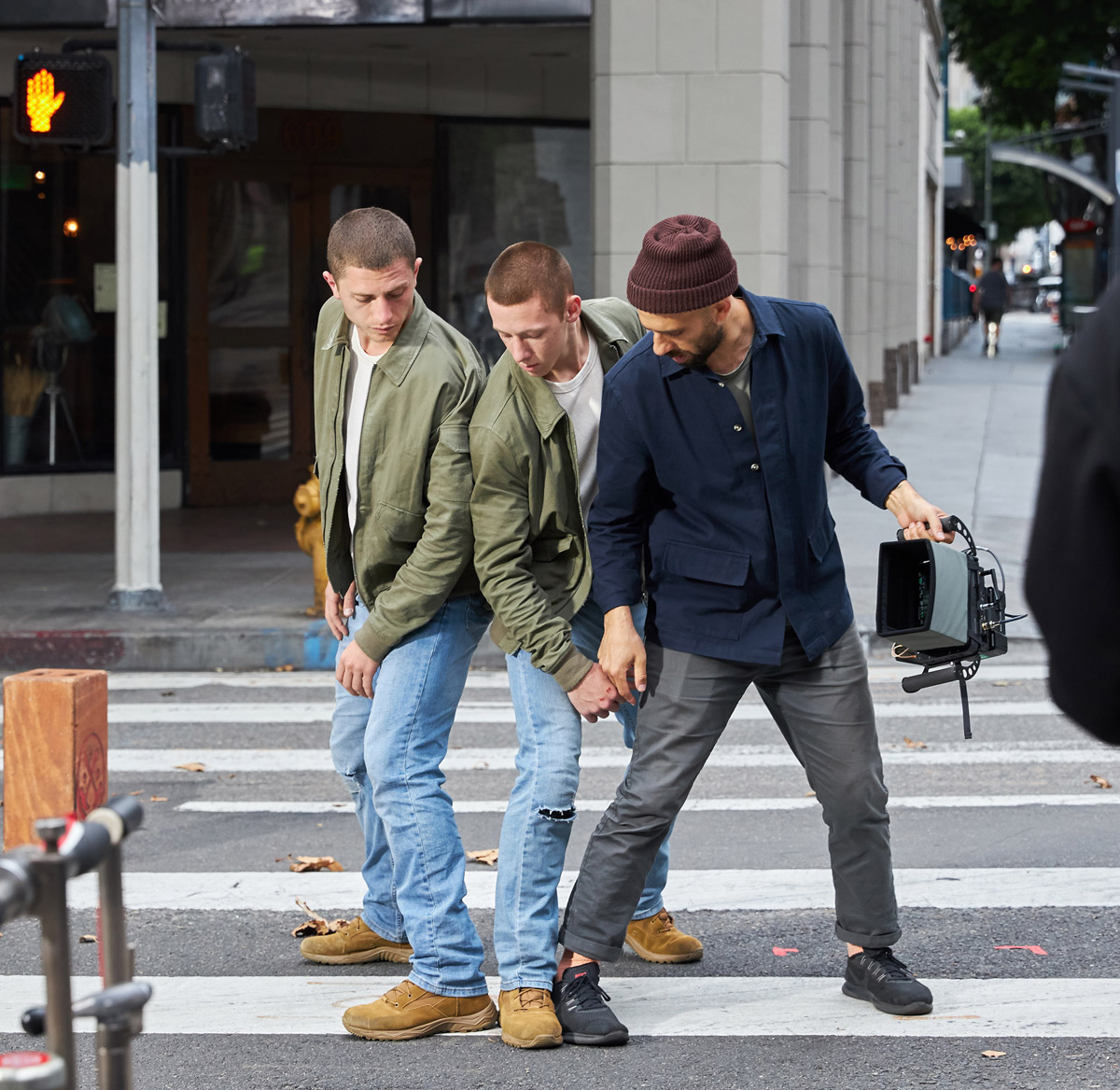 On location shooting a commercial for Volunteers of America

JH: When someone approaches you with an opportunity, what is usually the thing that determines whether or not you take it on?

IR: First and foremost, I’m drawn to anything where I feel like I will learn something about myself in the making of it. I feel like that process, for me, is what makes a great film, and why I’m constantly drawn to the medium. I’m still a scientist at heart. 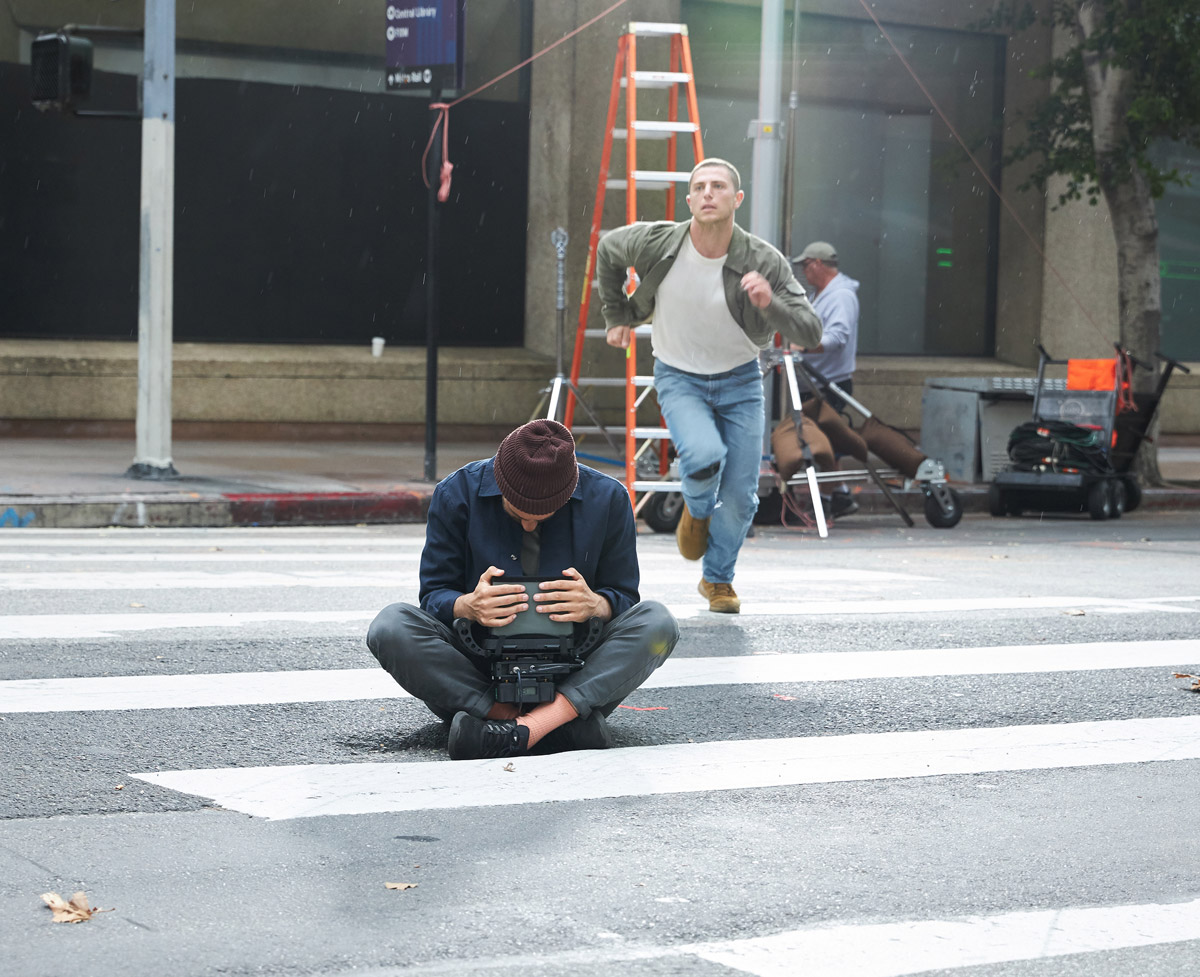 On location shooting a commercial for Volunteers of America

JH: What’s the most recent thing you’ve learned about yourself?

IR: I recently finished reading The Overstory by Richard Powers (also Alex Ross’ New Yorker article on the bristlecone pines), and have a somewhat recent fascination with trees. I’ve been taking long walks in the forest, or the botanical gardens, and really thinking about time a lot.

I’m learning just how skewed, and self-centered my relationship with time is — as is our entire society. One of the things that is amazing about the medium of film is it’s the visual art that is best able to convey time passing, and I’m really interested in exploring this perspective.

Volunteers of America: “The War Inside”

JH: Can you share the 5 most inspiring things you watched in the past year or so?

IR: Without explanation or context:

JH: What’s one thing you’d like to accomplish in the next year or so?

IR: There are a few feature-length film projects in the works. The big goal for the next year or so is to begin shooting one of them. Finishing it, on the other hand, might be overly ambitious.

JH: What about in your lifetime?

IR: I’ve been so blessed in my life, I just hope to leave this world a better place than I’ve found it. And leave it in general, to die in space. Mars maybe. I don’t know.

Billie Marten – “Creature of Mine”

“Voices of God” by Cole Borgstadt

Yukon Blonde – “YGTT (You Got That Thing)”