An Interview with Animator Julian Glander

We had a chat with one of our favourite animators, Julian Glander, on the heels of screening his hilarious short film Bloop’s Birthday at SXSW. Today he’s sharing a bunch of shorts he created for Disney so we asked him a little bit about how he got to where he is, and what’s next!

huge shout out to the only chocolate brand brave enough to keep the adobe stock watermark in its packaging pic.twitter.com/r3OrmlEdbf

Jeff Hamada: I’ve gotta say right off the top, you’re one of my favourite people to follow on Twitter! It feels like you’re just being 100% yourself and goofing around, is that true though? Or do you treat social media like a persona?

Julian Glander: Haha, I don’t take social media very seriously at all. I can totally see how a tweet like “i want to marry the Geico lizard” could come across like a calculated persona, but it’s just how I feel. That’s what’s in my heart. Mostly I am just posting for myself, as a working diary–I have this fantasy that I’ll look back at my tweets in 100 years and it’ll be a nice time capsule of this period. Realistically, Twitter will shut down and all tweets will be incinerated long before then.

JH: Were you a class clown in school? I kinda really hate that term but what was younger you like?

JG: I was more of a shy, gloomy emo kid. I kept to myself and drew a lot of comics but I didn’t really like getting that much attention. Now that I am an adult, I love attention.

JH: I don’t know if you ever used an old Apple program called Hypercard, but that was my first exposure to making animations (really crude ones). What was the first animation you ever made?

JG: Hmm, I don’t remember Hypercard but I did have a similar program called KidPix which was amazing. I think the max image resolution was like, 200 pixels. And if you wanted to erase something you had to blow up the whole scene with an actual stick of dynamite. That’s a UI choice you don’t see too often any more.

There was an animation unit in my Computer Literacy class in high school. It was this throwaway class taught by the shop teacher and he really didn’t want to be there. I made a Flash animation of a ghost floating around a bunch of different environments, and there were stock photo watermarks all over everything. 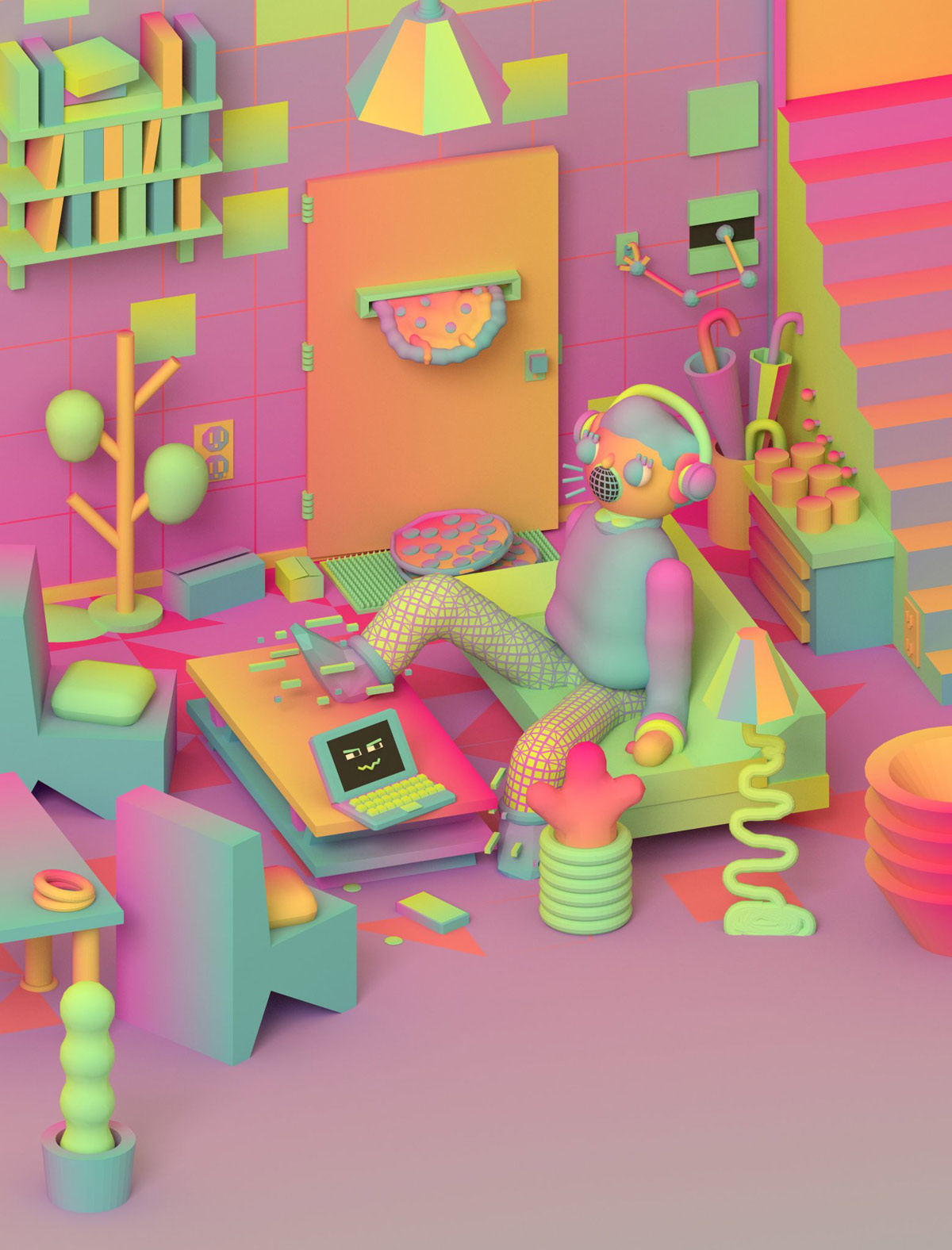 Illustration by Julian Glander for WIRED

JH: Haha, I wanna see it! Your style has become very recognizable, can you talk a little bit about what your work looked like before and how it’s become what it is now?

JG: I’ve been doing Grafix since I was a teenager, my whole career started doing t-shirt designs and entering them in online competitions. It’s weird to even look at them because in some ways it feels like someone else made them but I can also remember the exact feeling of like, scanning in those sharpie drawings and livetracing them on my mom’s computer. I went through a lot of art phases and ripped off a lot of different illustrators, but everything didn’t really come together until I got the 3D modeling software Blender. That’s what I use now.

I still think of myself as a fresh new baby in the illustration world, but now that I think about it I’ve doing this for like ten years. Yuck. 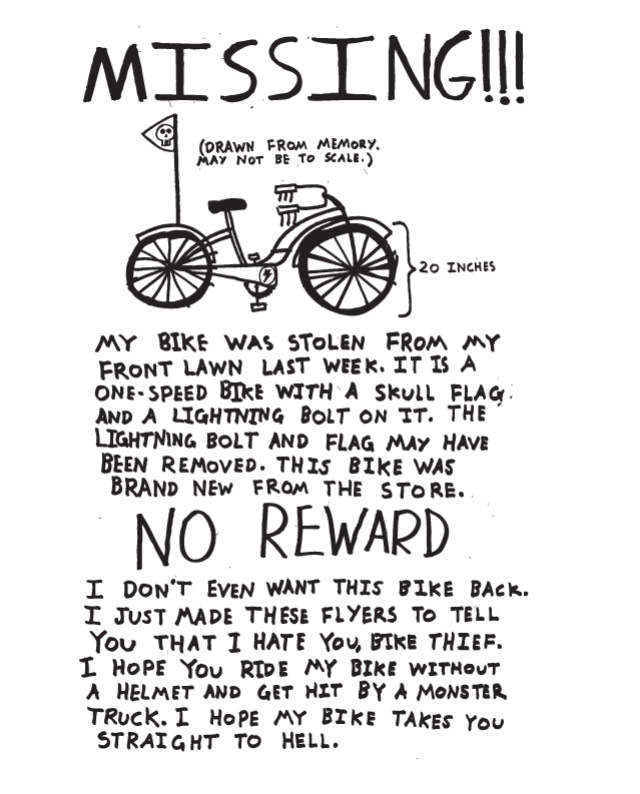 JH: I know you love Minecraft, what other video/computer games are you into these days?

JG: I do love Minecraft, but I’ve only played it for a few minutes in my whole life– I more love the idea of it, I love that kids all around the world are in this unrestricted digital play space and learning the basics of 3D art. I love the culture of people making music videos and short films in Minecraft for Youtube. Feel so positive about the next generation of kids, they are so creative and tech savvy and they are going to just completely destroy us. Regarding other games, I can’t stop playing Beglitched. Everything Jenny Jiao Hsia makes is game gold.

JH: Let’s talk about this Disney series, did they just hit you up after watching some of your Vimeo videos?

JG: They emailed me out of the blue one day last year while they were setting up a new Microcontent app they were developing called Disney LOL. The idea was that they were letting a bunch of creators have free reign and make whatever short-form content they wanted geared toward their target age demographic, which I think was 6-11 year olds. My pitch was basically that I would do a series of shorts based on the 3 moods I explore the most in my work — Cute Dogs, Weird Blobby Guys, and Cool Pastel Teen Stuff.

It was a really chill experience and obviously a lifelong dream to work with the House of Mouse. I kept thinking I was going to mess it up or make something that was too weird but they were so supportive and cool. 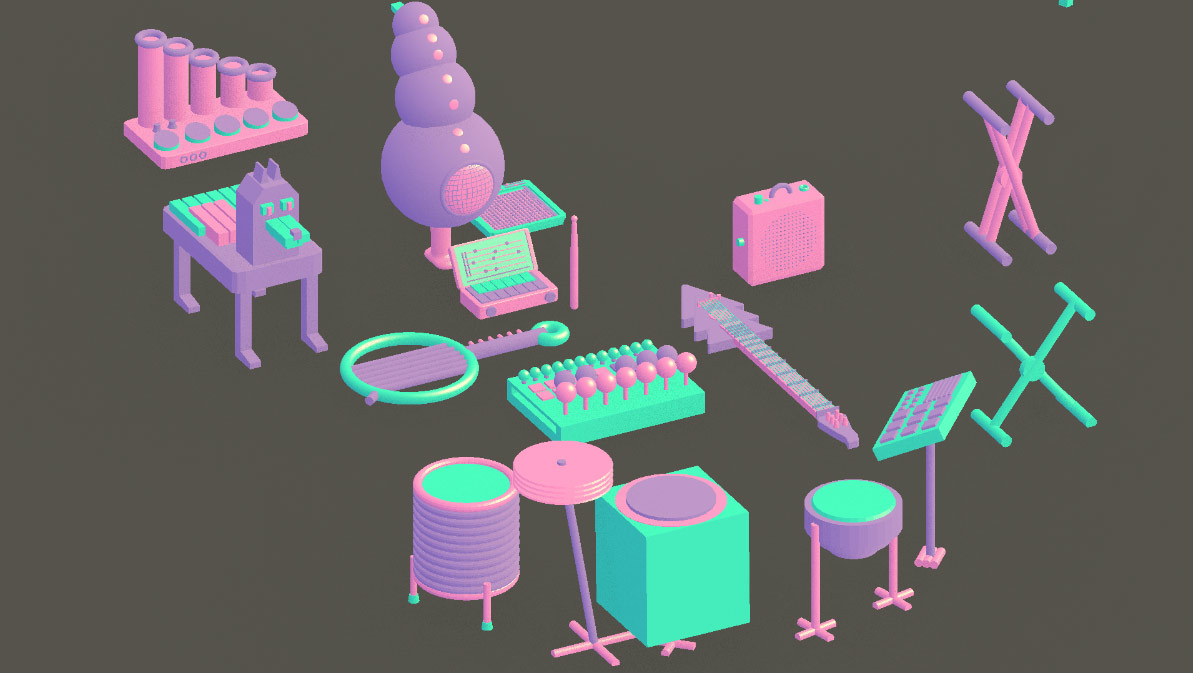 JH: All I’ve ever wanted is to be a cool pastel teen. Do you make the music and the voices? Everything feels like it comes directly from your brain.

JG: Yep yep! I love being an animator in 2017 because you have the tools to do every single job in the pipeline– writing, boarding, modeling, animating, coloring, voice and sound fx, and music.

For the Disney project, it was basically out of necessity. It was such a tight timeline that I didn’t have time to bring in musicians and voice actors. But I love to work on the music for projects like this, especially if I can bring in a genre or style that’s a bit unexpected. For the Songwich series, I really wanted to do these dreampop/shoegaze-y versions of some of Disney’s songs from their TV shows. For the Cutest Dog videos, I used a bunch of arpeggiator presets and the magic drummer feature in Garageband– so basically the music generated itself. And I’m always a sucker for pitch-shifting effects, making my voice sound really high and goofy. It never gets old.

JH: You have a really great sense of comedic timing, do you write a lot?

JG: I studied creative writing in school and I like to flex that skill set, but mostly as a compliment to other things. I wrote 90 pages of dialogue for my game Lovely Weather We’re Having, which was really fun because it was just freeform writing without a ton of pressure to be like this great, impressive text. Lately I’ve been carving out a few minutes of every day to write a screenplay for an animated feature I’ve wanted to make for a little while. Probably shouldn’t have said that because it’s totally going to jinx it. Ok, never mind, the feature is dead.

JH: I really loved Bloop’s Birthday. I could see it being a really great show on the Cartoon Network or something. Has anyone ever reached out to you to do a series?

I’m glad you mentioned that! It’s my lifelong dream. I’m not sure how much I’m allowed to say about this, but there is definitely some cool stuff in the works 🙂

JH: I have this “story” called Piñata Man that I want to turn into an animation. Maybe you can give me your thoughts on it. It starts with these kids at a birthday party hitting a piñata horse in a tree, and they are really smashing it. Inside a nearby hedge a pair of eyes are watching, and slowly a figure emerges from the bushes and when the kids see him they yell “PIÑATA MAN”. But Piñata Man just stares at the children and then looks over at the horse laying on the ground. The kids start running up to him but he raises his hands and shoots candy out rapid-fire like a super power. I imagine there being happy music here and slow motion as candy rains down on dancing children and then it quickly cuts to a wide shot of the whole backyard and kids legs are sticking out from under huge piles of candy. Piñata Man slowly walks back inside the hedge. What do you think!

JG: Oh my god, I love Piñata man. When I read this treatment I imagined it in the style of Matt Reynolds, like really crazy and Beavis and Butthead-y. Let’s get someone to sponsor us and make this film happen– I just googled “Top Piñata Companies USA” and found some potential clients. 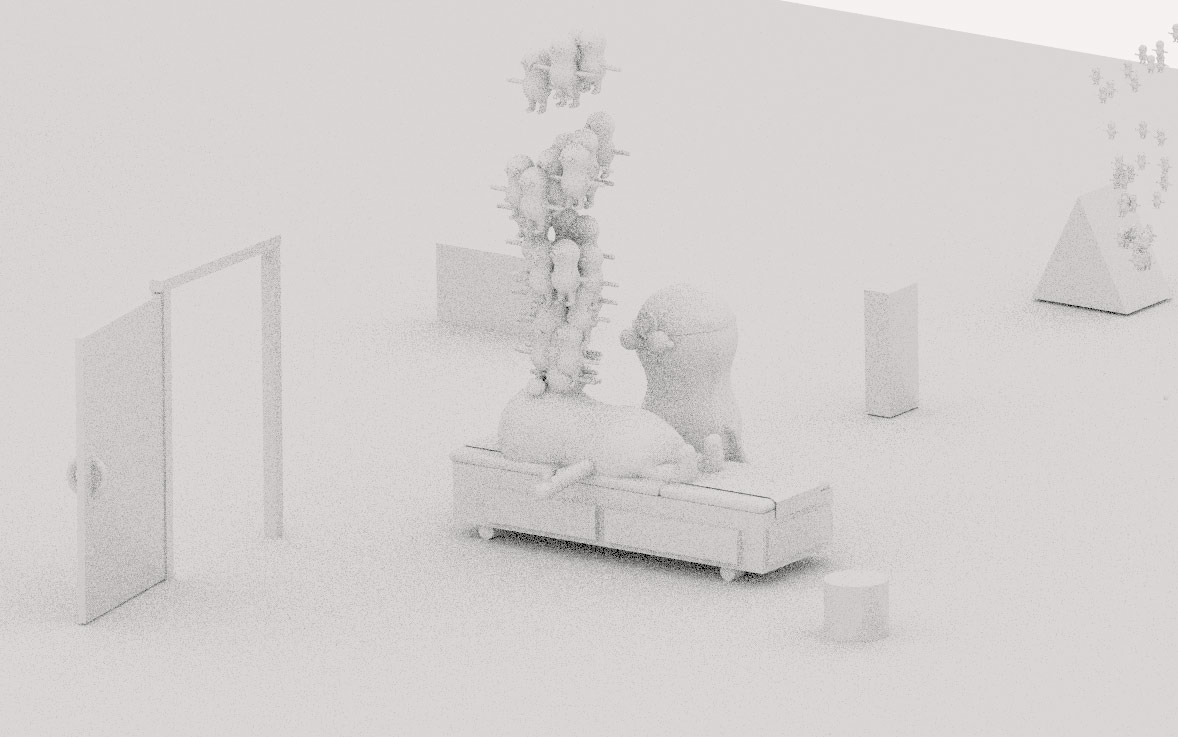 JG: More long-form stuff. I find myself getting caught up trying to make something for Instagram every day, because I’m addicted to posting. But slowly moving my process toward projects that are bigger and more satisfying. Like a big juicy steak instead of a bunch of Cheetos.

JH: Maybe we can end this with one of your all-time favourite scenes from an animation?

JG: First thing that popped into my head was this scene from Gumby– the basic premise is that they’ve broken a mirror by playing their music too loud, so they try to fix it by playing the same song backwards. I love that insane story logic, and the amazing architecture and furniture designs from the old Gumby episodes predate a lot of cool contemporary design trends by about 50 years.