Short Film: “At The End Of The Cul-de-Sac” / Interview with Director Paul Trillo

Shot from a drone in a single take, New York City-based writer and director Paul Trillo‘s latest short follows a desperate man as his life unravels in front of a growing crowd of concerned neighbours. Watch “At The End Of The Cul-de-Sac” above and check out our interview with Paul as well as some behind-the-scenes photos from his ambitious project below! 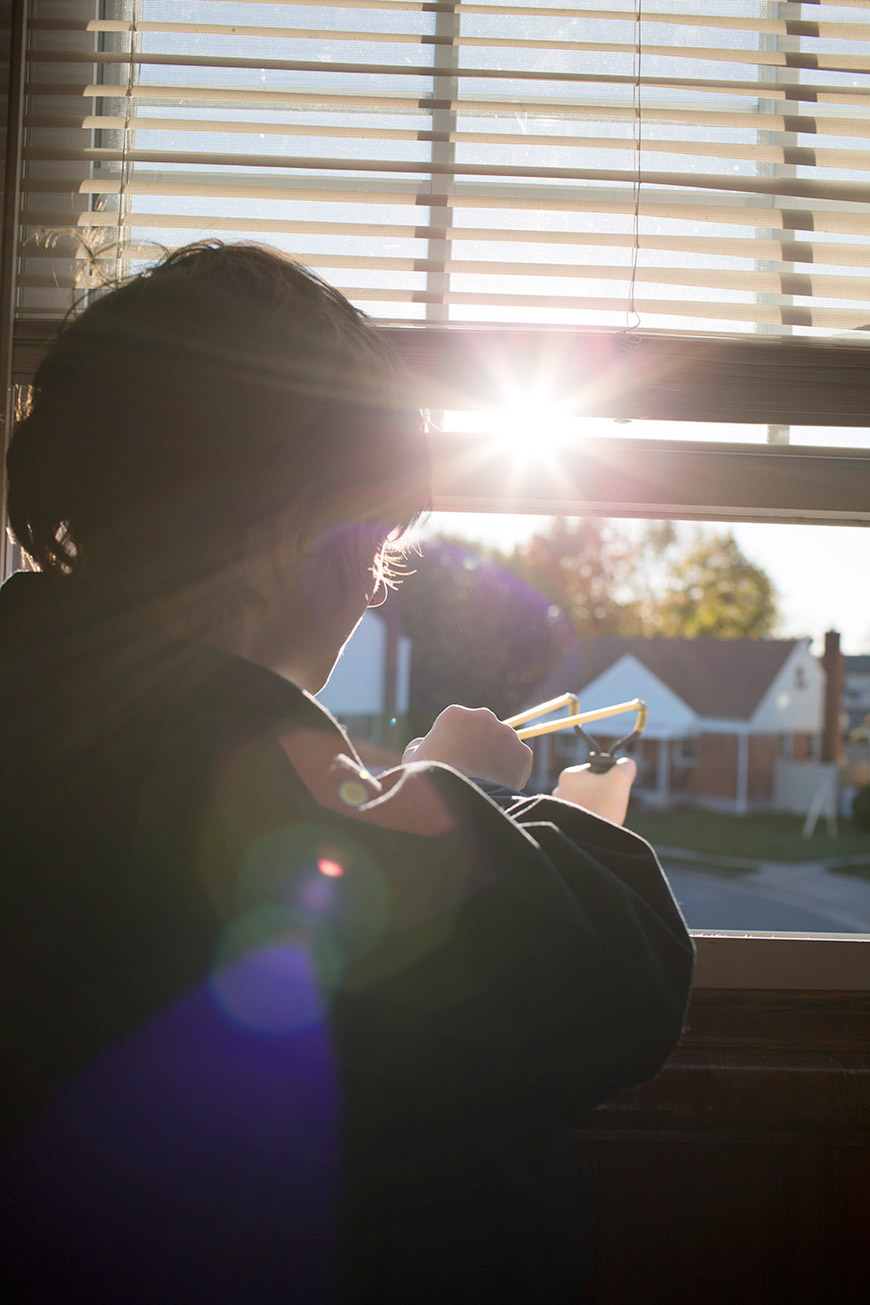 Jeff Hamada: Okay, how the heck did you shoot this? Recording dialogue over the annoying sound of a drone must have been a challenge!

Paul Trillo: A ton of pre-planning, pre-visualizing and rehearsing. Getting rid of that annoying sound was an annoying challenge but one I was fully ready to tackle when I signed up. Not being able to record sound is the reason no one has done a dialogue-based short film with a drone. It’s incredibly painstaking.

Each actor had to be wirelessly mic’d up and recorded to a separate audio channels. However, the irregularity of the drone’s propellers and the varying distance from the actors makes this impossible to mix out. The audio was only used as a guide track. The mic pack became an obstacle in our second take. When the lead actor, Gabe Fazio, started to get really fired up, his mic pack fell down his shirt and he had to catch it. It ruined the entire take.

At the end of the day, we reshot the film handheld and I ran through the script with the actors a few times while they were still in the same mindset and in the same environment. This helped replace the lines for most of the supporting characters. For the Julien and Susan characters, who have significantly more dialogue, we brought them into a recording studio months later and had them re-create their performance syllable by syllable. 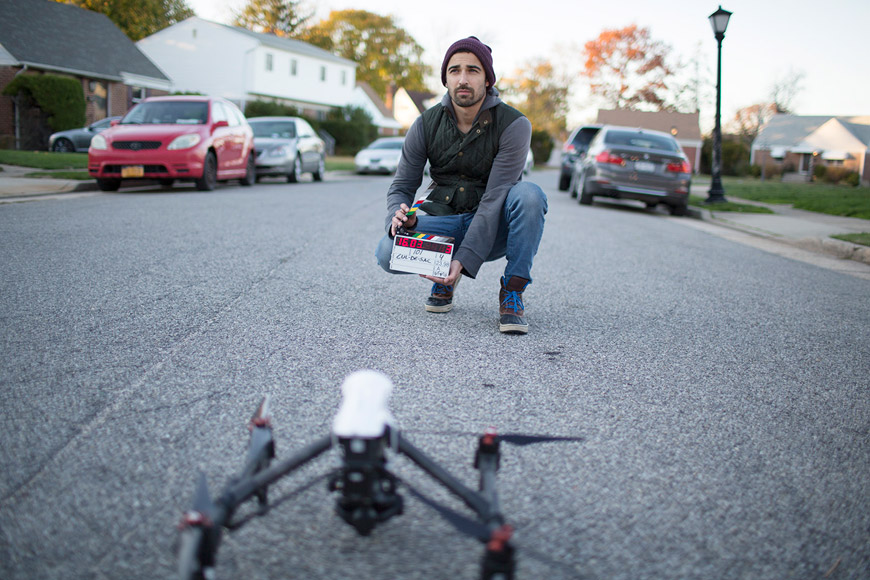 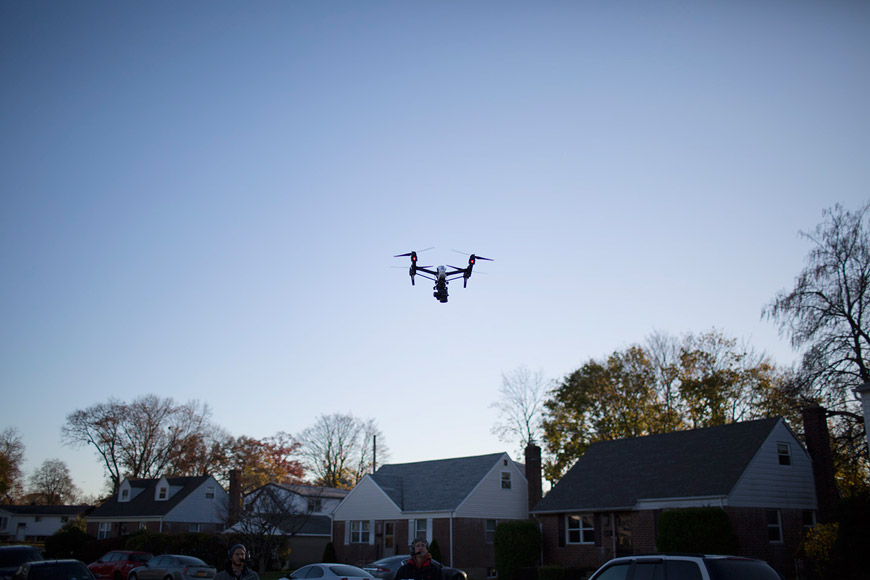 Jeff Hamada: And that whip pan?

Paul Trillo: That was all real. I think some people think there is a hidden cut in there and there easily could be. The pan is actually a lot whippier than I had planned on but this ended up being our best take. In fact, it was our first take and was only supposed to be a rehearsal but it worked better than the other 1.5 takes we managed to get. 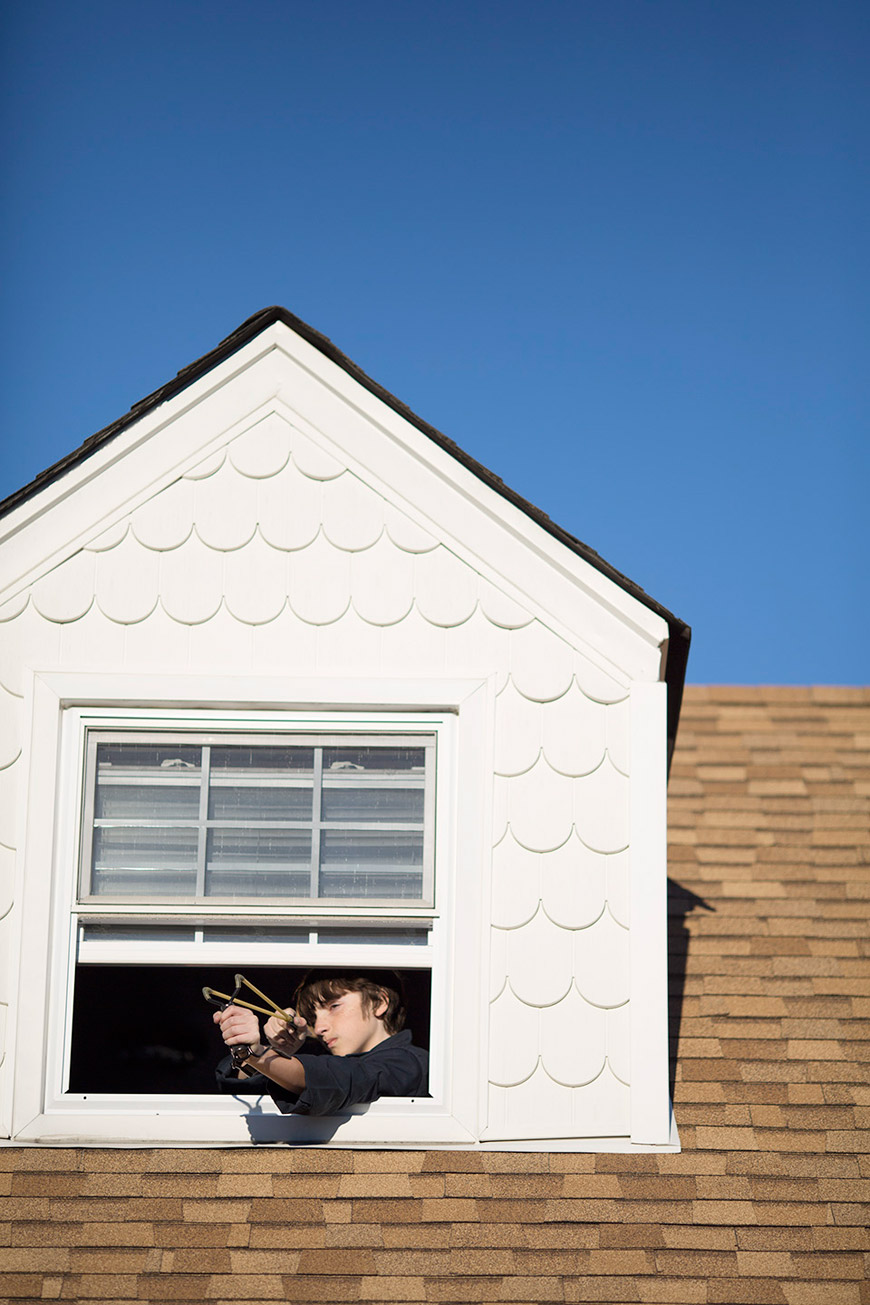 Jeff Hamada: Did you start out wanting to do a drone one-shot and work backwards from that or did you have the story first?

Paul Trillo: I sort of burnt the candle from both ends and arrived at the story in the middle. I had been wanting to do a single take drone film since they really became a filmmaking tool. It was really all I wanted to do. When we started moving forward with what this might be a few things evolved out of the simple fact that we’re doing a single take drone shot. It provides a very tense, unsettling view to travel through the scene. It very much feels alive, like an omniscient viewer. I wanted to be aware of that and that’s where this idea that it was projecting some sort of judgement on the character came out of.

The cul-de-sac was a great setting to do this since we couldn’t shoot in a city and we didn’t have a budget to lock off an entire street. Shooting at a dead end allowed us to contain everything to our own little bubble. On the other end of that, I had been wanting to do something involving a public freakout. I have witnessed many over the years and it’s fascinating to watch how other people react. When confronted with something like that in real life, people keep their distance, and retreat to their own life rather than trying to help the person. This reaction changes when people hide behind the veneer of the internet. The culture of public shaming has run rampant online where people are so ready to take down a target while knowing little about who that person is. Those themes eventually made their way into this drone project. I wanted to tell a story that would be unexpected to see from a drone. 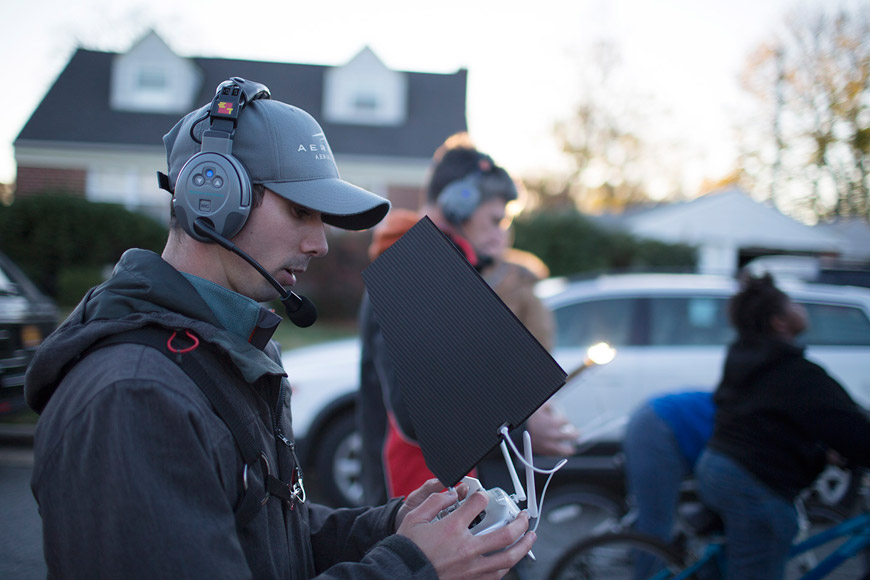 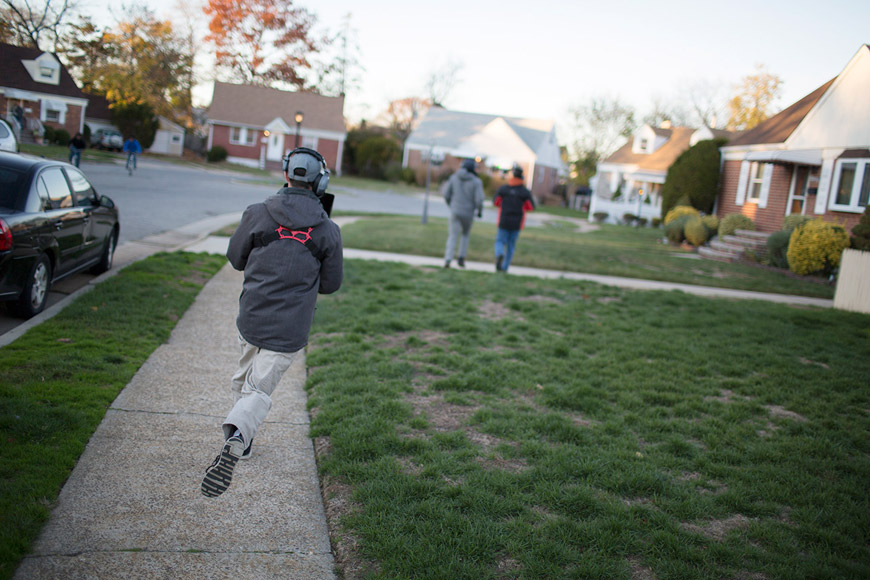 Jeff Hamada: It seems like you enjoy experimenting on the technical side of filmmaking, like the camera rig for The Irrational Fear of Nothing and now this. Do you think at all about the balance between a gimmick and narrative device, taking advantage of a technology but in a way that doesn’t take away from the story you’re telling?

Paul Trillo: Absolutely. I look at each technique or technology and wonder what would be the best story to tell using that device. Rather than telling some arbitrary story through a new perspective, what can the technique provide as insight into the theme? What feelings does this perspective invoke? I keep that in my mind as I’m developing the concept. I’m constantly aware of the dangers of the gimmick so I’m looking for stories that can transcend the gimmick. Ideally the technique starts to disappear into the story and you’re not even aware of it by the end. 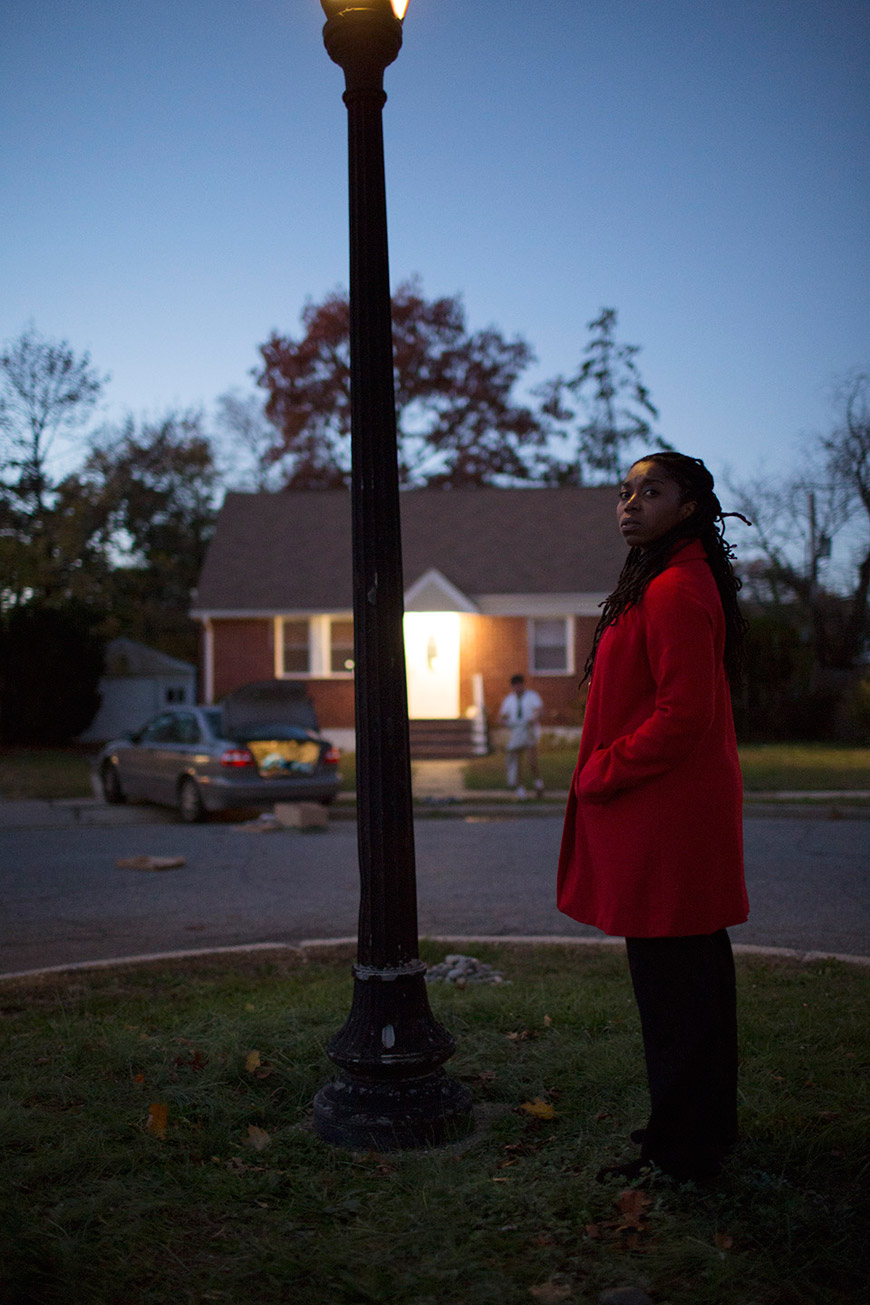 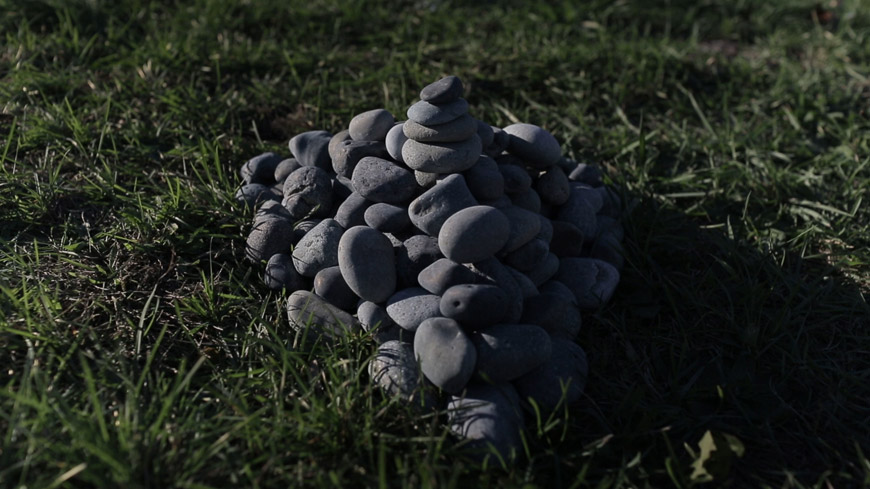 Jeff Hamada: Who are some other filmmakers getting you excited these days?

Paul Trillo: There are the usual suspects that I wait anxiously to see their next film and then end up disappointed. So much new talent these days that are creating more interesting work than the people I used to hold up on a pedestal. These people who have rose to fame through the internet have me the most excited. I am constantly in awe and looking forward to everything Hiro Murai does. In a similar boat, Khalil Joseph has also created an amazing tone and very curious to see him carry that to longer formats. I loved the last string of films Ruben Ostlund, Jeremy Saulnier and Rick Alverson. So anytime their names pop up I’m down. Also digging the style and storytelling of Paolo Sorrentino behind The Great Beauty and The Young Pope.

Paul Trillo: Still need my coffee for the day. Possibly a muffin. Doing commercial stuff. Working on another couple drone related projects, that if we pull it off, could be really big. Developing an episode of an interactive series. And when I have a few hours here and there, polishing up my feature length script. 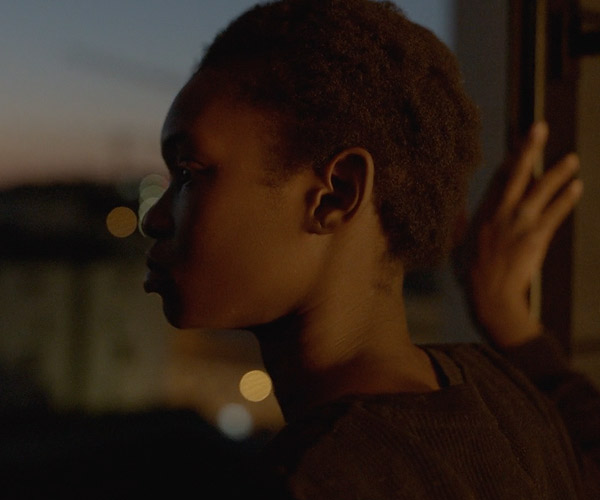