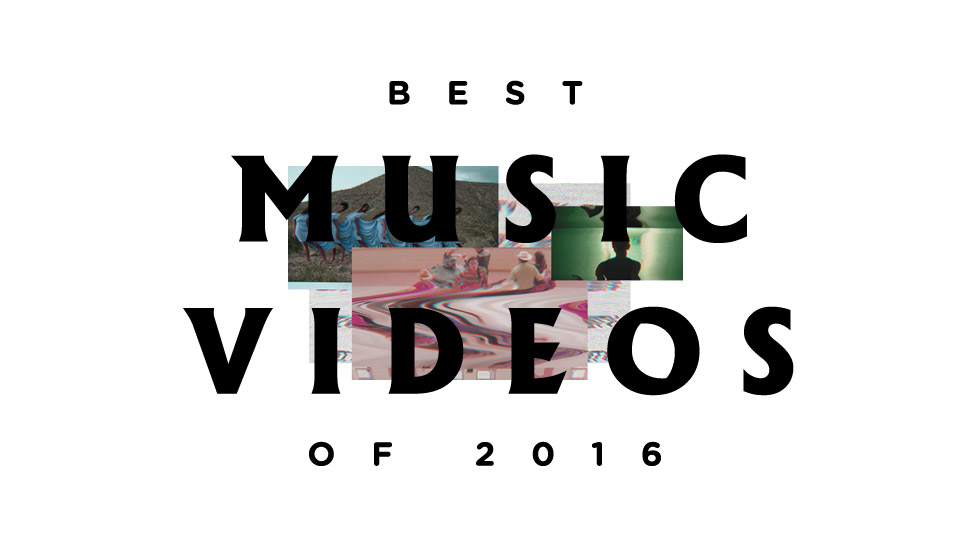 Here are 20 of our favourite music videos from 2016 — a year, for better or for worse, with an abundance of long-form music videos, music films and visual albums. Some were good, some were not. In the end it felt unfair to compare projects like Beyoncé’s Lemonade to more traditional music videos, so we excluded those sorts projects from consideration. For the record, Florence Welch and Vincent Haycock’s The Odyssey was still our favourite long-form project even though most of its content was released throughout 2015 (but it’s an honest to God masterpiece so who cares).

The use of the word ‘best’ in the title is for the sake of Google Search results (ha!). Some funny, some serious — all 20 were videos we immediately had to watch again. If you disagree with our picks (the absence of Paul Thomas Anderson’s video for Radiohead for example) send us a tweet, we’d love to hear what videos you would have picked!

You may have no clue what’s going on story-wise but that’s okay. This one made the list purely for its style and energy. Director Anton Tammi has a really unique vision — he’s one to watch for sure.

It’s understandable to be a little jaded when it comes to Wes Anderson inspired videos, and this is an obvious ode to Rushmore, but there are just so many great characters and locations here. Fun level = 10.

You may remember Kevin McGloughlin as the guy who previously made this. The amazing kaleidoscope hyperlapse effects in this video were created almost entirely in camera. Besides inverting a couple clips and overlaying for a total of 5 seconds, there is no digital or 3D manipulation.

David Helman solidified himself as one of our favourite directors this year with several stellar videos. This one’s a perfectly surreal accompaniment to the song.

A video we can all relate to: A girl dreams of a spicy rollerblader in a cowboy hat. So many great shots in this.

A few small elements in this video — the recorder, D.R.A.M.’s smile, the loopy photo technique — give everything a genuine sense of fun and make this video highly re-watchable.

An entertaining and absurd clip from one of our favs, Helmi, who can apparently nail a completely different style in every video he directs. “Move Together”, could’ve easily been on this list too.

Korean-American rapper Dumbfoundead takes on Hollywood’s lack of diversity in this great mashup of digitally altered scenes from major blockbuster movies and popular television shows. The made-at-home vibe of the composite work sorta adds to Dumbfounded’s message; if Hollywood won’t help him, he’s gonna do it himself.

This video will make you wanna go and watch everything Kyle Thrash has made. An absolute stunner.

A simple editing pattern exploited to the extreme and just enough secrets hidden throughout to make Youtubers watch it over and over and over. Warning: If you don’t fully give your mind over to this video you will actually go insane trying to watch it.

This video sorta sidesteps our rules for this list as this one is technically two songs, but it’s quite short (and we can do what we want). This is a poetic portrait of a late sumo wrestler and MMA fighter Emmanuel Yarbrough. And that description does nothing to prepare you for what you are about to see. This is on another level.

A flawless video from Sam Pilling. Nothing like a good old fashioned brawl between world leaders. Who knows, with Trump at the helm this could be foreshadowing.

Nathan R. Smith is the only director to appear twice on our list. Tough to do a song like this justice and this video certainly does.

Every. Single. Frame. In. This. Video. Round of applause for the art direction by Solange and Carlota Guerrero.

6. The Avalanches – “Because I’m Me” (Director – Greg Brunkalla)

This is a sleeper video that could easily be under appreciated. Everything about this video is perfect. Watch this one once and it already feels like a classic.

There may never be a moment in a music video more powerful than the final shot in this one. RIP David Bowie.

There is so much soul in this one. Really gorgeous stuff from Miles Jay.

There could have been a bit more of a story here but there is no denying how stunning these images are. One of the biggest videos of the year comes from one of the biggest directors of the decade.

What you’re seeing in Hiro Murai is a director in complete control of his craft. Such a powerful, beautiful, hopeful message — and told so simply and poetically. A+

It feels like a long time since there was a good Michel Gondry video (or film) to talk about, let alone a great one! This is one of those videos that makes you quietly wonder to yourself how many simple ideas are left in this world.