Behind The Scenes: Xeno & Oaklander – “Palms” 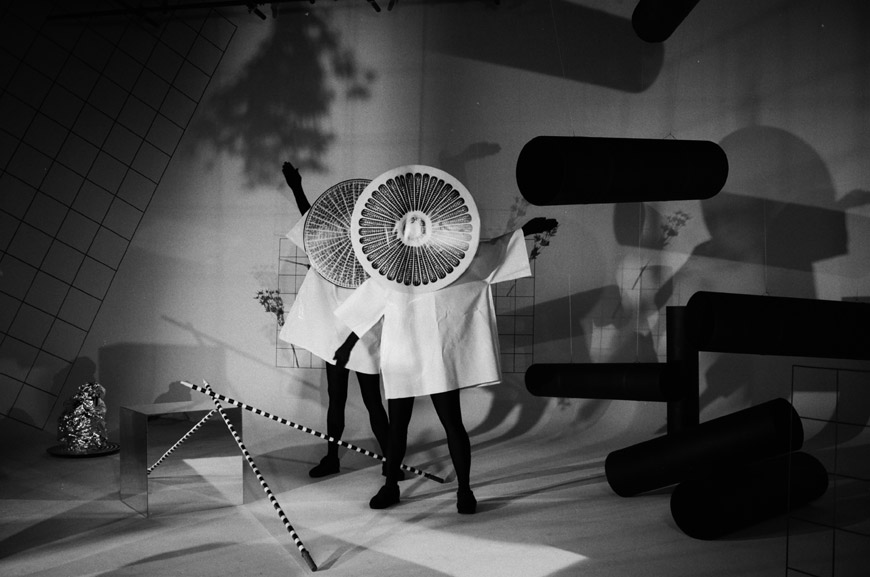 Booooooom: Let’s start off with the song, what’s the significance of the sea?

Liz Wendelbo: The song PALMS is about a tropical beach at night – kind of inverted. What seems peaceful and warm during the day, such as the beach, the ocean, become frantic and hypnotizing at night. Under the moonlight everything appears Black and White. Moonbeams shine through silhouetted palm leaves as the wind makes them quiver like a strobe. This is the dancier song on the album, so we wanted something fast for the video, and in Black and white, with visual references to sea life. The idea of bringing the underwater theme of the song into a studio setting and making it theatre was very exciting to us. We had just visited the Bauhaus building while on tour in Europe and were really into the Bauhaus aesthetic.

Booooooom: How much of the final product was planned from the beginning?

Liz Wendelbo: We hung out a lot with director Lauryn Siegel (we live in the same neighbourhood in Brooklyn) so we tested a lot. I am really into vintage photography; stereoscopic and 3 D in particular – this is a fascination I share with her. So we thought it would be amazing to combine antiquated photography and video with new technology – so that demanded a lot of experimentation first. 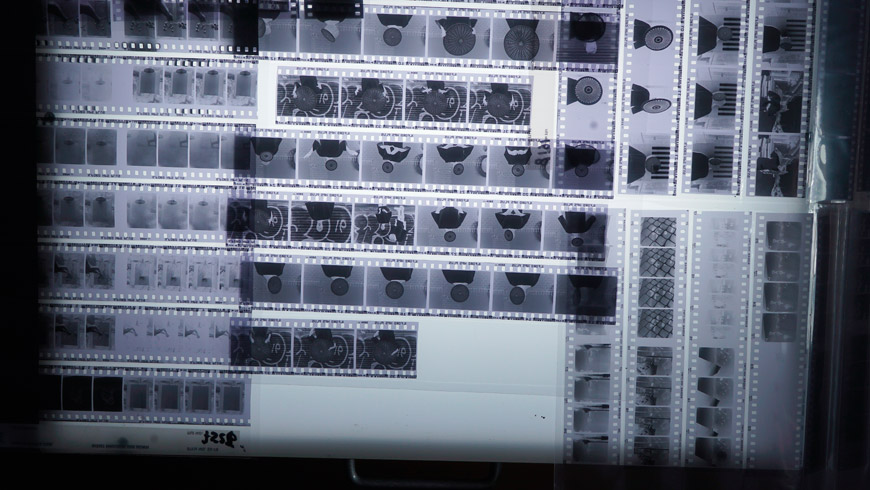 Booooooom: It would be cool to see the music performed live in this sort of an environment, are there any plans for something like that?

Liz Wendelbo: I’m very fond of theater and performance and would certainly like to have sets on stage in the future, or perhaps a combination of projection and props. Theater and the stage are running themes in our music since the beginning, with songs such as Sets & Lights, 4th Wall then and Chimera today. Topiary, our latest album, would be great as a play. 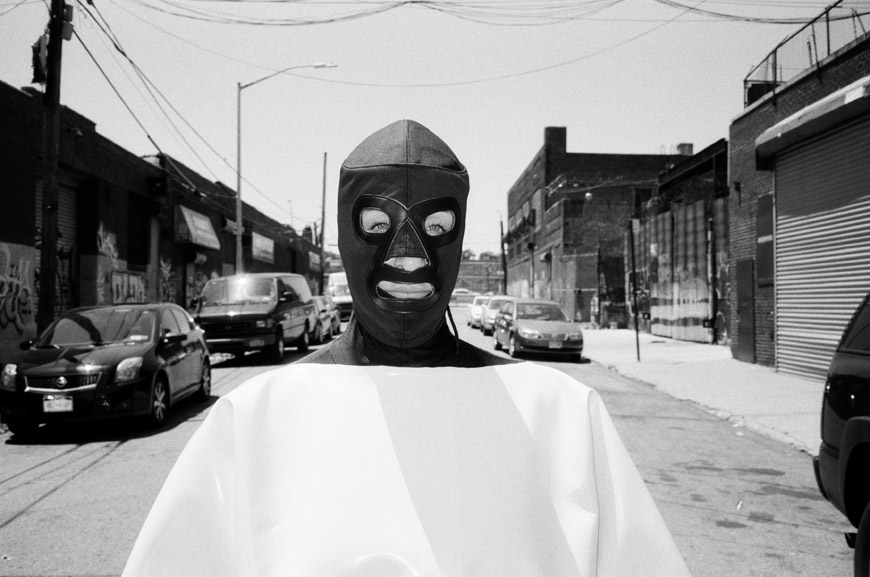 Booooooom: When you watch the finished video and consider the project as a whole what parts of it are you most proud of?

Liz Wendelbo: I really like how new and vintage technology blend in the video for PALMS, it’s like science fiction. And I love how free yet restrained the video feels. It’s sexy.

Booooooom: How were some of the video effects achieved? Did you re-film things off of screens? The little green flashes remind me of a feedback loop or when you turn off an old cathode ray tube television.

Lauryn Siegel: These days my work is largely characterized by mixing medias and visual references together. This video is definitely my most “mixed up” video in that sense to date. The little green flashes resulted from shooting a computer screen directly; not only that, but the effect came from combing through footage with the “cover flow” option on an Apple computer! My amazing editor, Grant Worth, was flipping through QuickTime files rapidly and I noticed coincidence with the music. We shot it on the spot with an iPhone and edited it right in with the 4K video from the set, along with old tube-video footage I shot myself while digital jack-of-all-trades Haoyan of America shot 4K.

The ceramic diatom was shot stop-motion style in my studio. I love using stop-motion for dark and messy ideas, returning it a bit to its roots when it was used for sci-fi sets, as it is often shown in a super colorful and cutesy way. I also put in a bunch of slit-scan effects which were produced digitally but based on an old analog video experiment that’s been used to great effect over the years. There is quite a bit of still photography with 3D stereoscopic cameras from the 80s which Liz and I both love, and some old tube-video footage as well. Basically every kind of media from every time period! 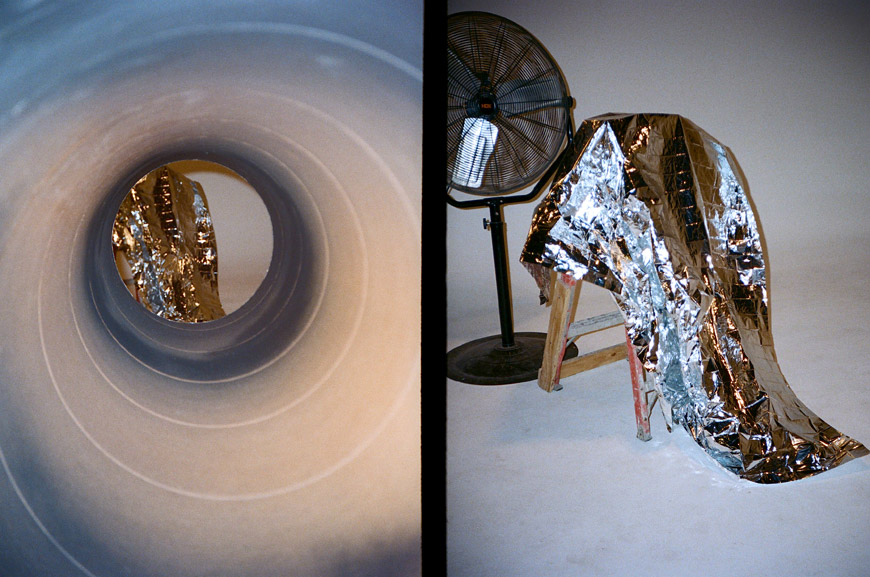 Booooooom: What was the energy like on set? It seems like it would have been fun to make.

Lauryn Siegel: I’m not sure if you catch it but there is actually a shot of Sean smoking a cigarette in one scene… and possibly holding a cocktail… Essentially the shoot felt like an intimate party because everyone involved is an amazing personality and many of us are friends IRL. Jonathan Peck, the artist who designed the sets, has collaborated with performance art duo SKOTE in the past. My friend Sarah Keough (editor of Put A Egg On It food zine) was taking shots on films, the awesome people from Ghostly International stopped by… We’re all huge fans of each’s art as well as the song.

SKOTE is comprised of Alex P. White and Jill Panagallo. Not only are they artists, Jill’s also a comedic performance art star. Her dynamic with Alex is very similar to Liz and Sean’s. They know each other so well they can communicate without talking so their physical dynamic charisma imbues the video. I should also note that we shot at Chemistry Creative in Bushwick which, in addition to being a great commercial studio, hosts amazing party and events and boasts fabulously talented employees including my friend Matthew Patterson Curry AKA Safety Scissors. A lot of my musical and visual inspiration in life comes from nightlife and public/DIY spaces so getting to shoot in these sorts of environments is always my first impulse. 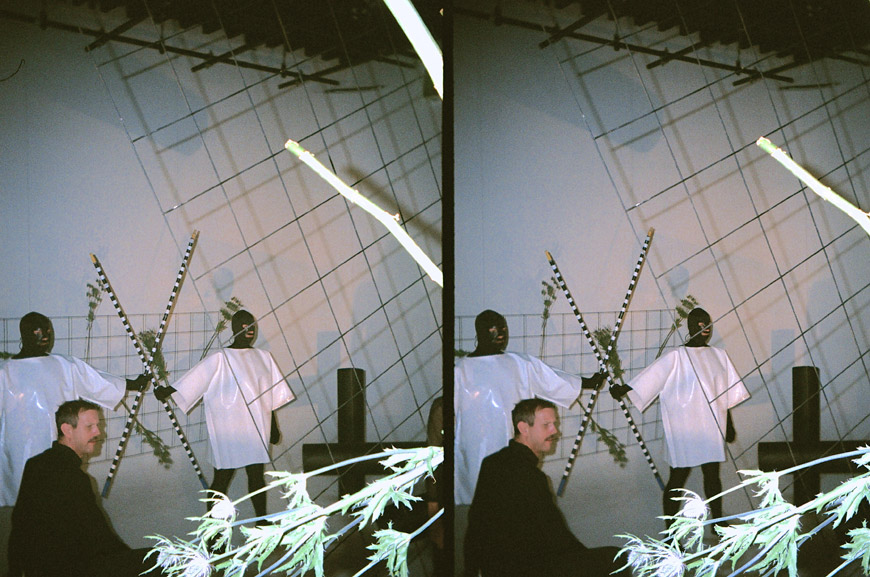 Booooooom: Did you guys do the whole storyboard thing or did it change as it went along?

Lauryn Siegel: I always plan the mood when approaching a video but increasingly take a fairly improvisational approach. I’m especially interested in new and developing media and a responsive approach to a format in creating visual techniques, as you might have gathered from the cover flow idea mentioned above. I made a detailed mood board and outline, but because we didn’t have much time to rehearse, I intentionally kept the execution open to possibilities to allow for the deeply visual concept, as well as humour, to emerge. There is a whole additional lens imposed by the post production process. My style is, more and more, very much in the “organized chaos” realm.

Booooooom: Can you talk a little bit about the influence of Bauhaus on this project, and specifically Oskar Schlemmer’s work?

Lauryn Siegel: Funnily this wasn’t a super conscious inspiration even though I’ve loved his work ever since I’ve known of it. I personally was thinking about a range of artists who play with shape, color (or lack thereof) as well as the body as a form that can be played with, enhanced, etc. I really respond to the minimal/maximal ideas found throughout Bauhaus with a particular fondness for the women of the Bauhaus movement some of whom can be seen here.

If you look over Xeno and Oaklander aesthetic and media history you see a strong linkage to the ideas expressed in Bauhaus and analog film in general, so it really felt like a great way to take my pre-existing art interests into the video realm!

That being said, one of Schlemmer’s most famous works transfigures the body into geometric shapes, which I love because of the overt lines it draws between bodies and technology. Schlemmer was born right in the middle of the Technological Revolution. I’ve been thinking recently about Moore’s law, and how it has changed the way we perceive technology emotionally. I feel like Xeno and Oaklander have been able to take a really “tech” centric form – synth driven new wave music and possess it with a sense of deep resonance and warmth that really feels like a direct parallel to the ideas Schlemmer was channeling with his looks and movements. 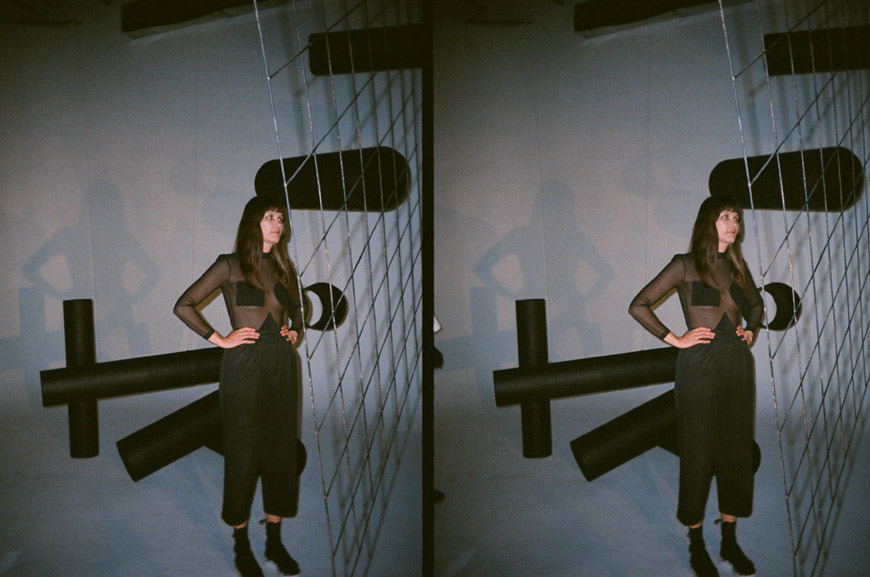 Booooooom: When you watch the finished video and consider the project as a whole what parts of it are you most proud of?

Lauryn Siegel: Any time you come together with people you’ve never worked with (or even those you have) to create something that feels true to the ideas you believe in it feels like a major accomplishment. But mostly I’m stoked to make something that feels fresh and new but also nods to the artist and thinkers that have inspired me since well before I was born. It can be tricky working with so many different medias so just wrangling all that with my group of evil genius collaborators is truly a massive treat. 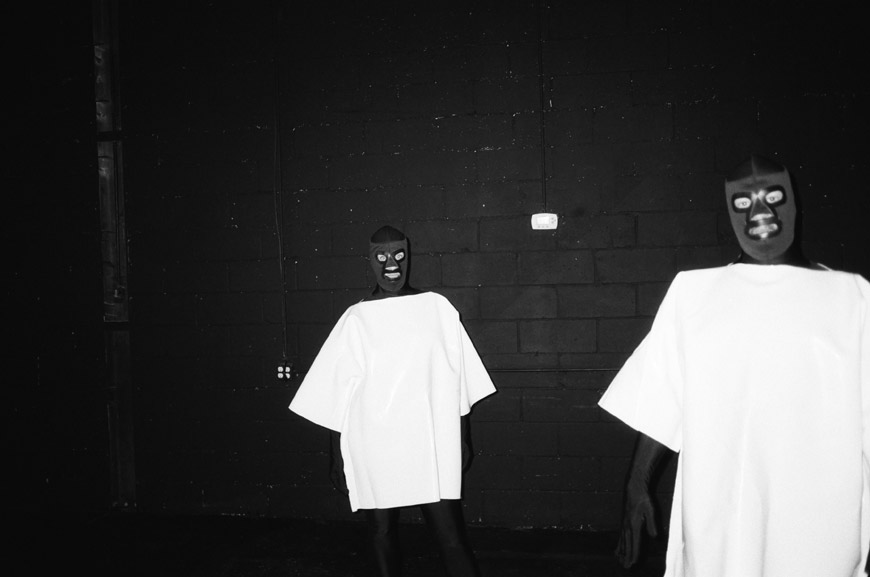